When we got bored with big city we took the bus and went to the town called Margao. Between 4.00pm and 7.00pm we were still passing Mumbai streets. The Sleeper Class in our bus offered us some comfort for all night and at 8.00 in the morning we reached Goa state. Twenty minutes by rickshaw and we got to the Indian Sea beach. Hot morning sun, fresh sea breeze, some cold beer, some sweet bananas for kids and we didn’t need anything else.

The place was called Colva Beach. Not far from there, in Sernabatim village we have found nice accommodation. Two rooms, kichen, batchroom, big living room with tv, nice couch and three balcons. Everyday in the afternoon we walked to the beach by Colva streets exploring some shops on the way… After we have found nice and quiet shortcut that was passing though grass and sand dunes. Some pounds, some exotic plants by the way… that nice area allowed me to get closer with Indian flora – first time I have seen cashew fruits, with my daughter we were surprised with its smell and were sure that (we should it just the fruits…) Seeing for first time jackfruit on the tree I was really shocked with its size and the way how this kind of pumpkin can grow on the tree… 😉  I also  tried to hunt for a wild mango but it seems not that tasty as fresh garden mango… that’s the dream of my tongue! It was also a place where my daughter learned to drive a bike. You can see here how she was happy for that.

Because we love to test new tastes we decided, with Maya, to get some sport. It was a few days in this sweet two months in Goa when we had run on the beach. Along the beach we took the oportunity to swim there a little. So fresh, morning experience! 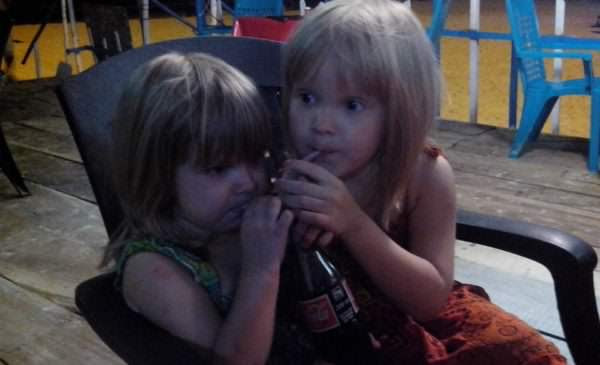 The beach called us everyday not only for the sea but also to our friends in Russian pub called Zenith – the owners – mother and son, the clients – our Russian friend Natasha with her sweet six years old son – friend of Katia – and her Pendżabi boyfriend which turned out as very good cooker… and two Kashmir boys, pub workers which had so much care for our kids, what we cannot forget never and ever…