This place is called Jagannath Puri, or Puri, the land of Jagannatha

Essentially, in our tightly defined categories that most often include only the “four major world religions” or simply “our world” and “exoticism” one could conclude that Hinduism prevails in this land as well as in the rest of India. This, however, is a very flattening subject, I would even say a banal, stripped region of its uniqueness drowned in the depths of ancient myths.

Unlike most areas of the Indian Subcontinent, there is Jagannath Cult here, not Vishwanath – or the cult of Vishnu.

The word Jagannath means in literal translation the Lord of the Universe. In other words, he is Purusottama – the Supreme of Purusa. All daily and seasonal rituals performed in the service of Purusottama are in principle the service to human existence. The human body is subject to degradation, but not atman – means the soul. In analogy to this spiritual truth, Purusottam Jagannath gives up his old body and receives new one. But his Brahmapadarth – the inner divine substance – is not impermanent. He moves to the new divine body.

The realization of this great spiritual practice is known as Nabakalebar. It is a ritual closely related to the temple of Sri Jagannath in Puri by the coast of the Bay of Bengal – a key place on the map of history and religious worship in Orissa.

According to local reports, Vishnu, Jaganntah and Krishna is the same – hence the multitude of temples and ashrams devoted to Krishna. Krishna is like the earthly manifestation of the great world ruler, who is Vishnu, and he himself is the atman meanng soul. Krishna Ashrams are very popular among people who come from the West.

Sitting in the evening on the balcony of our little hotel by the sea , we have a perspective on a village of fishers of with a cross of the church placed above in the center of the village. During the day the cross is white, composing picturesquely with the village and sea waves, and at night it shines red. Actually, only the vertical part shines, reminiscent of a sword stuck in the ground filled with myths about Jaganath … 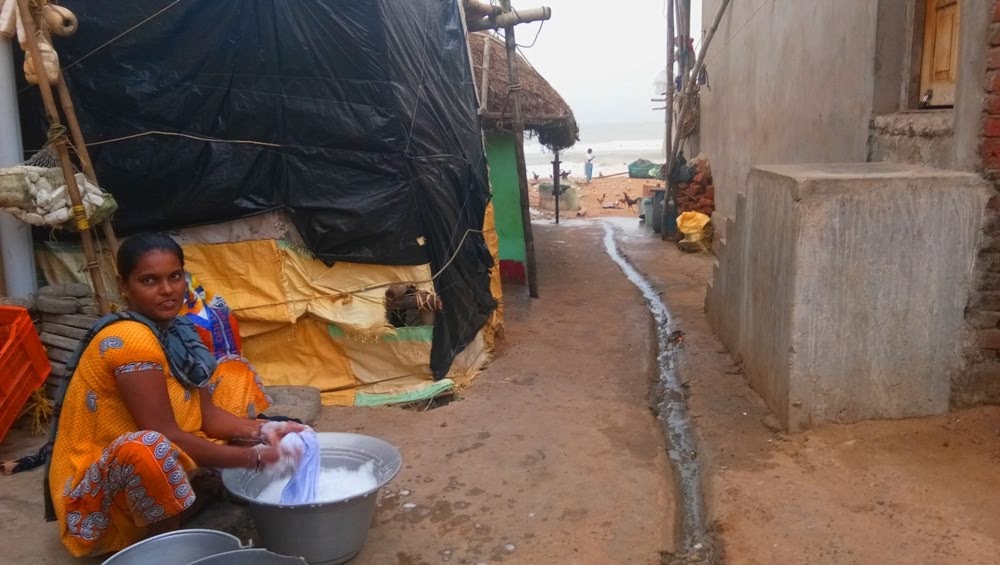 Although Christians have done much good on the coast of the Bay of Bengal in Orissa, for the people of lower caste and still watch over the interests of the illiterate generation of fishermen in the modern world of sneakers, a large part of the village still keeps the large Jaganatha in their homes, and the children worship a small blue baby named Krishna.

One more particular feature characterizes this land: bhang shopy. The popular drink made from sweet lassi with the addition of the hemp extract known as bhang is widely available here. Although the law on herbal consumption is the same in all India, it is well-known that in this place tradition is more important what the local police have in mind. And although the offer of locals regarding herb and its derivatives like bhang is passed down in a hushed voice, it is rather a whisper that has more of an advertising dimension.

»  Gallery – Orissa: In the village