The tradition of the Losar festival dates back to prehistoric pre-Buddhist times in Tibet.

When Tibetans traditionally practiced the Bon shamanic tradition, a festival was organized every winter in which people offered innumerable incense to local spirits and deities. This tradition has remained until today as the annual New Year’s Buddhist festival.

Tibetan calendar – according to which the Buddhist communities in our area were celebrating recently Sonam Lhosar is a compilation of several chronological systems, but above all it is based on Kalachakra’s teachings. The first chapter of these Buddhist teachings – Kalachakra Outer – includes Tibetan cosmology and chronological research. Kalachakra Tantra was translated into Tibetan from Sanskrit in 1027 by Anna Domini.

On Tibetan coins, the summer was defined in accordance with the rabjyung-cycle system, in which the first year is 1027. According to this system, we have now begun the rablo (year) 992.

Starting from the second half of the twentieth century, another record of years began to be used. According to this system, years have been counted since 127 BC This system is known under the name bod rgyal lo. According to this dating, the current year of Ziemia Pies is calculated as 2145, as it is printed on the Tibetan calendars available for sale.

The cycles were counted with ordinal numbers. However, the following years did not count within one cycle, and the names assigned to twelve animals in the Chinese zodiac were suitable.

The zodiac system functions today. In addition to the names of animals, years are assigned to the elements. One of the five elements – the elements – rules for two years in a row, then follows the time of the next element. Year 2000 was the year of Metal Dragon, and 2001 – Metal Serpent. After two years, another element follows. Thus, 2002 was the year of the Water Horse … and so on.

The twelve-year cycle of animals includes:

The ten-year cycle of elements includes:

Every year is ruled by one of five elements and one of the twelve animal characters, as in Chinese calendars. The first year of a given element is the year in which the male element rules, while the second one is governed by the female element. The next year is again the year of the male element of the next element.

It is important, however, not to mix these systems together, because in reality the days are counted differently. One of the significant differences is that Losar – the Tibetan New Year and the Chinese New Year are not always overlapping, can differ by the entire lunar month.

Chronological systems in the Tibetan calendar

Tibetan cosmology is a combination of Buddhist astrology that is part of the Kalachakra Tantra, Hindu astrology with Shiva-Tantra and ancient Chinese astrology. Officially, the Tibetan calendar is a lunar system. However, it uses different systems that harmonize solar and lunar factors.

There are three systems for defining the New Year:

Each of these three systems is used for different purposes. While the calendar that begins with Lhosar is used to determine time, solar systems and the lunar system of the Five Elements are essential for astrological calculations and planning of Buddhist rituals.

Calculation of days and months

The Tibetan calendar is 360 days a year and uses a complicated system of skipping days (tsi-chad-pa) and additional days (tsi lhag-pa) to align the differences between solar and lunar cycles. Therefore, a given month can have two dates 19. and not have 23. For example, in the month of March this year – 2018 – the date of the fifteenth of the first Tibetan month was omitted on the calendar: on Thursday, the first of March we had the fourteenth day of the first Tibetan month and the next day on Friday it was already the sixteenth day according to the Tibetan lunar calendar. However, the twenty-fifth date of the first month occurred twice – on Sunday 11 and on Monday 12 March.

In this way, thirty lunar days form the lunar month – tshes – the time from new moon to new. Each month begins with a new moon phase, so the full moon must fall out on the fifteenth day of the lunar month.

Months in the Tibetan calendar were also marked with the symbolism of animals and the first month was the month of the Dragon. Currently, however, in relation to months, the ‘Mongolian’ ordinal numbering system is used.

The rules for calculating the Tibetan calendar are complicated and passed from master to student. 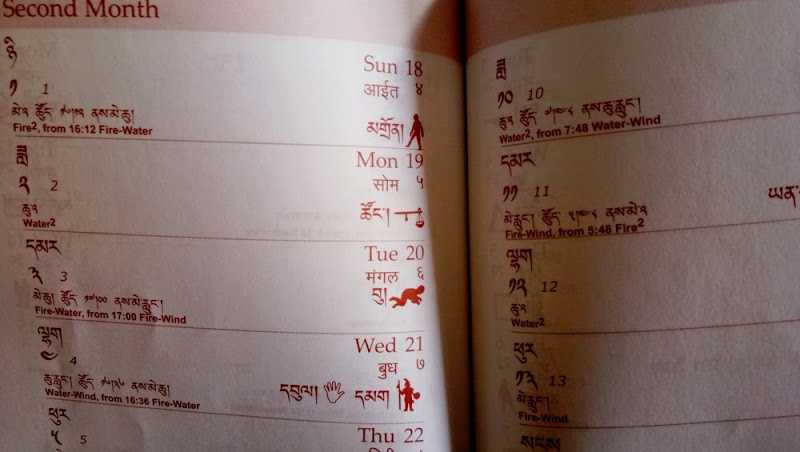 Kalachakra’s astrology is aimed at determining the favorable time of various undertakings, which allows harmonizing the internal human energy with the external energy of circumstances.

In Tibetan astrology, the days of the week are classified as harmonious and disharmonious depending on the year of birth of the person. The so-called Days of Happiness and Days of Life are particularly suitable for starting projects and celebrating successful events.

The Tibetan calendar includes regular holidays and special days of Tibetan and Buddhist festivals. In addition, every day of the year is a special day for specific Dharma practices. Each edition of the calendar must include special days of apprenticeships and festivals, days of sacrifices, days of prayers for prosperity and removal of obstacles, birthdays of masters of specific lines of Buddhism of the Tibetan lines.

Every month, specific days of the lunar calendar have a special meaning. On these days, the merits of our activities are increased by a hundredfold:

The eight Mahayana Vows are vows received by lay people for one day – they involve abstaining from killing, stealing, sexual activity, lying, intoxication, singing, dancing, wearing ornaments and eating solid meals in the afternoon. For the first time you should get an indication from a qualified teacher, and the next time you can take them yourself.

Particularly successful days of the year are marked as Special Days:

Special days – especially those related to the life of Buddha Shakyamuni – are also referred to as festivals in this calendar. According to the teachings of Kalachakra, it is believed that the effects of our actions – both successful and negative – multiply one hundred million times. So in these days, it is particularly recommended to keep a conscious mind, maintain proper views and practice the Dharma.

In the tradition of the Kalachakra teachings, it is said that the Buddha gave them on the full moon day. Therefore, the time when the fullness takes place is considered a special day to practice this tantra.

In addition, Tibetans operating in Nepalese society also benefit from the Nepalese calendar Vikram Sambat based on the moon cycle, according to which we now have the year 2074.

Days of the week

The Tibetans called the days of the week the names of celestial bodies. Here we go:

Often children are given names that are names of the day of the week in which they were born.

When an infant is born, it is considered to be almost one year old. It is connected with the concept of rebirth functioning in Tibetan culture. According to her, man’s life begins on the day of conception, so 9 months earlier.

Each subsequent birthday is celebrated annually on Lhosar day, so on this day all Tibetans celebrate their birthday together. In practice, this means that a child born on the last day of the Tibetan year has one year, and the next day – on Lhosar – it is two years old. So, if you want to know exactly what age is a Tibetan, you should know his date of birth in accordance with the Western calendar.

The births of the great Tibetan sages are usually celebrated according to a fixed date according to the Tibetan lunar calendar. However, in order to avoid misunderstandings in the Western festival, the birthday of His Holiness the Dalai Lama is celebrated with a fixed date on June 6.