The birthday of the historical Buddha Shakyamuni Gautama

falls in full moon in the month of May. 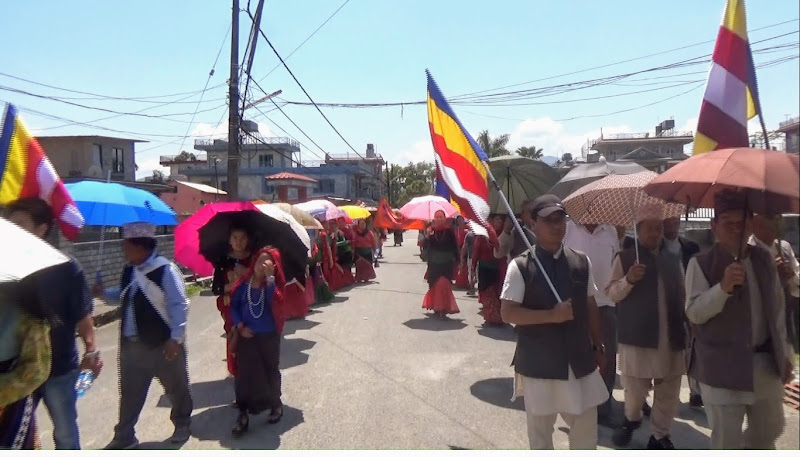 Every year in early May, sometimes at the end of April is held in Nepal Buddha Purnima, otherwise Buddha Jayanti, commonly known in other Buddhist countries Wessaka.

This year it fell on 13th May. So we went from our mountain homestay in Methlang on a scooter straight into one of the largest Buddhist temples in Pokhara, Boudha Arghou Sadan. This monastery was that day the main organizer of the festival’s Buddhist parade across Pokhara.

There was a colorful decoration of the gate with flowers and ribbons. At the entrance we were pinned with the festival pins, yellow cards with inscriptions in Nepali.

The party started at five in the morning, and at 9 the mass of people occupied different shady places in the territory of the monastery, cumulatively mainly in the feeding area, where they served sweet rice with shredded vegetables and tomato chutney, for free. So we had our lunch and then – following the information – we went to the bus, which was planned to take us to Nadipur, free of charge. The bus stop is on the hill at the Hindu temple, just above Boudha Arghou Sadan. Along with the other festival makers we packed into it and we were quite quickly in place.

In Nadipur, the Pokhara district was another Buddhist center run by the Newar caste. Dharma Shila Buddha Bihar was founded in 1941 and is therefore the oldest temple in Pokhara. 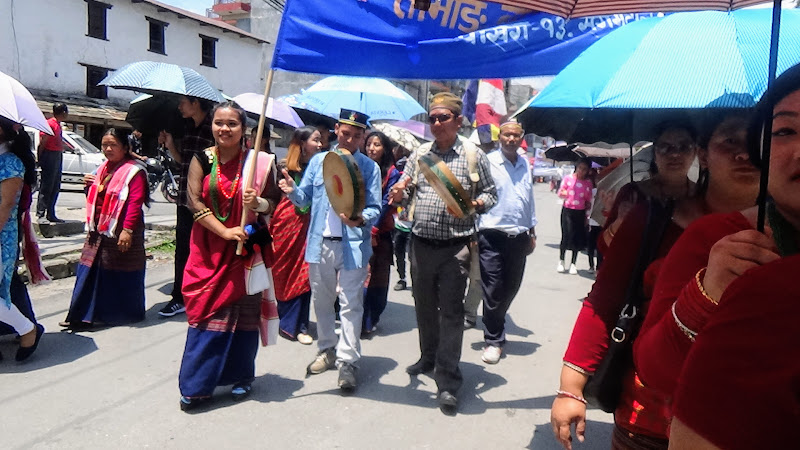 The festival’s pilgrimage included the followers of all the Buddhist sects of Buddhism, each with its own native colors. They followed patiently in two rows behind the musical section and a group of teachers of their sanghi. The parade was led by a car-equipped megaphone carrying a small Buddha statue Shakyamuni under a red umbrella and a small stupa.

We admired the Tibetan trumpets, plates and drums, as well as the impressive looking women in sari and the masses of young and younger monks in red or red-yellow robes. The parade took 1 hour of walking in the sun.

Finally, we reached Marpha Thakali Samaj Sewa Sadan, where the scene was prepared with chairs for the audience. At the entrance it was supposed to be covered with smoke from sacred plants, which unfortunately we missed. Once seated we were treated with a  bottle of mineral water and a set of baby sweets. There were several lamas and several young monks who sang Puja together on stage. Among the enormous amount of information provided in the Nepali language. Then there was a musical performance with guitars and accordions.

Soon after that, we vanished.