Chili comes from regions of South America, and the Portuguese brought it to India.

Most often it represents the paprika Capsicum anum, sometimes Capsicum frutescens. Nowadays in India, there are various varieties of chili with different spiciness making the country the world’s largest producer and consumer of this spice. Essentially, Indians distinguish mostly green fresh chili – and several types of ground red chili pepper spicer and milder, kashmir. The sale of fresh red chili peppers is rare.

It should be taken into account that fresh peppers left to dry give a powder which, compared to fresh chili, significantly loses its.

Chilli hotness is defined on the Scoville – SHU (Scoville Hot Unity) scale. While Capsicum anum peppers, which in Poland we buy as sweet peppers, have up to 200 on this scale, then the top of the scale is reserved for Dragon’s Breath – the hottest pepper bred last year by a certain Welshman. The next in scale is just pure capsaicin – the substance that makes us feel spicy – 16,000,000 on the Scoville scale.

Below I present the most common varieties found in India, ranked according to this scale. 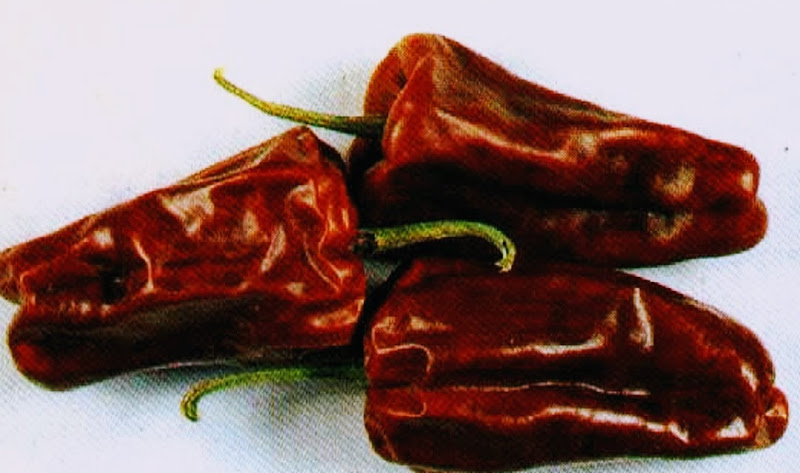 Available as dried. A wide tapered chili with a round tip, dark red. Pretty gentle. Bred in Khammam, the state of Andhra Pradesh in southeast India.

Available as dried. Very aromatic, not very spicy – between 1,000 and 2,000 on the Scoville scale – intensely red, narrow, fleshy chili in a conical shape. Grown in Kashmir, it has a pleasant fruity aftertaste. The original Kashmiri chili is available for a short period, and the demand for it is high, so it is rarely exported from the region. Often, however, her substitutes are met. Mostly the peppers used to make Kashmiri chili powder are elongated, often Kaddi and Dabbi are used, or other milder varieties.

Available as dried. Large conical shape peppers are used in the state of Goa. Moderately hot, sometimes dried, and ground as a substitute for Kashmiri chili. Scoville 5,000.

Available as dried. Dark red pepper, long and heavily wrinkled. of only 10,000 – 30,000 Two varieties are popular: Kaddi is slightly smaller than Dabbi. Meet mainly in Karnataka. Commonly used on the Malabar Coast is considered the basis of the Marathi region’s cuisine (Maharastra and Goa). Used in the preparation of Goda Masala. Sometimes they also ground it and sell it as a popular “Kashmiri Chili Powder”, while Kashmiri itself is produced in small quantities and is hardly available. 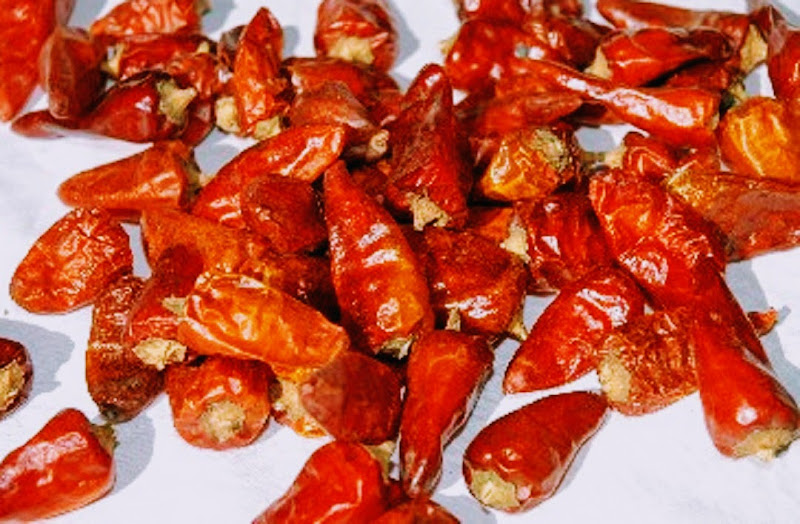 Available as dried. The short, wide, conical shape of auburn pepper with about 40,000 Scoville. It has no aroma. It grows in Gujarat, on the west coast, popular throughout all of India. In the states of Gujarat and Maharashtra, it is used to make pickles, it is also used to give the dish the focus without changing the aroma.

These are small green peppers soaked in salted yogurt and then dried in the sun for about a week. They are extremely tasty, fried in a small amount of oil. Popular around the Malabar coast. The pepper used for the production of Curd Chilli should have a fire between 30 and 40 thousand. SHU.

Available as dried. Small – about 2 cm in diameter – round peppers with a shiny skin, orange-red color. Medium spice, about 40,000. They grow mainly in the Ramnad district in the southern part of the Tamil Nadu state, mostly used in Chettinad cuisine. 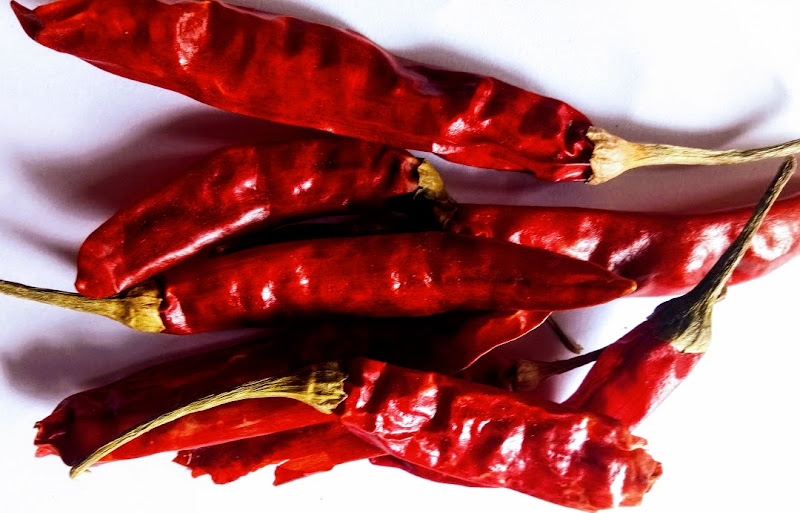 A wide range of rather hot peppers mainly from the Guntur region in Andhra Pradesh, on the southeast coast of India. The Guntur region is the production and export center of Indian chilies. Most often available as dried.

The name Jwala in Hindi means volcano. Indeed, the pepper is hot – about 100 thousand. according to Scoville. Available as fresh green chilies, sometimes it is also dried. Lengths about 1 cm, very narrow and slightly undulating. Ripens to orange-red. This is the most popular of the high-quality green peppers in India. Grown mainly in the state of Gujarat (north-west coast of India), but also in other regions. 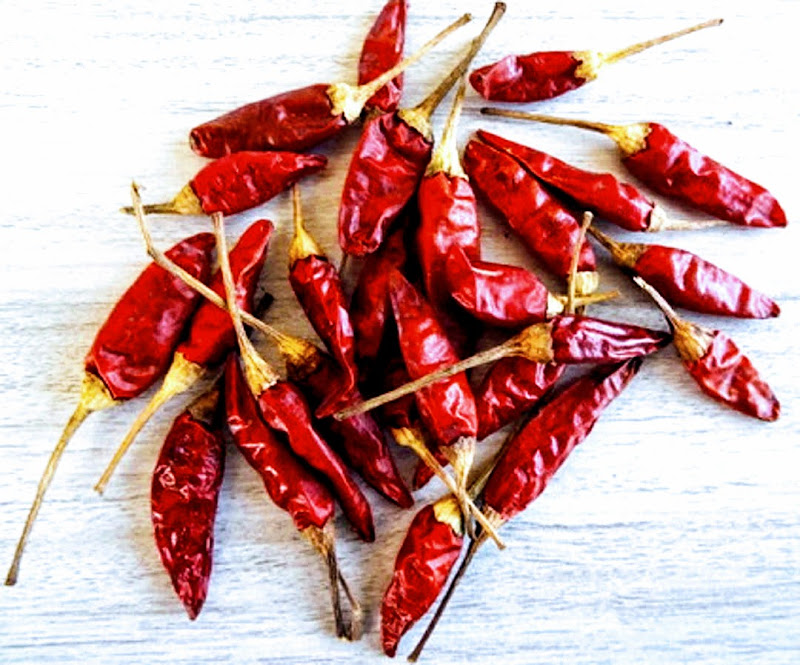 There are many different types of this variety of chili in the world, but they have several common features. Bird Chili is small in size, between 100,000 and 225 thousand – means very spicy. Grow, topping the stem with a sharp end up. They most often ripen to red, but often other colors of ripe peppers are found – orange, yellow, dark red, or even black. The spiciest ones are still green, they ripen out of focus, they even soften during drying.

Kanthari White – a typical type of white bird chili. Available as dried. A light yellow pepper overgrowing the regions of Tamil Nadu and Kerala. Small, conical shape, very sharp. Within this variety, there are also green and red peppers.

Mulaku Chili – it is also a bird chili – red or green – growing in the south of India.

Bengal Naga is medium-sized Naga peppers. The aroma is sweet with a floral note, slightly similar to Bhut Jolokia. Very hot, according to Scoville 700,000. Used in curries, sauces, or dried to powder. 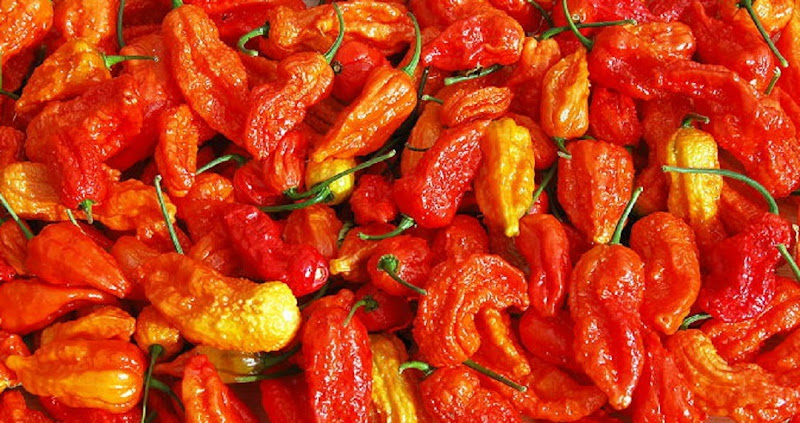 It grows in the northeastern states of India, mainly Nagaland, Manipur, Assam. It belongs to the genus Capsicum chinense or Capsicum frutescens. Its shape can change. The color most often red, however, meets white, yellow, and purple specimens. In 2007, it was popular as the spiciest available chili. According to Scoville Heat Units – 1,041,427.

I found round green pepper, on the top photo of this post, at the market in Canacona, Goa, I did not know what its name was. I would define its hotness at about 40,000 SHU, I used the same as the longitudinal Jwala available in nearby stores (in the same picture next to it).