After arriving in Chennai, – 22nd, by train from Goa –  first things first, we went to check trains to Pondicherry and we got information that the train is only at 6 pm, it goes from other station that is near and the ticket can be bought only 3 hours before departure. As it was around 1 pm we still had a lot of time but no time to lose.

In Chennai, you will find a railway network that is spread through the whole city. The main train station is divided into two parts. The train to Pondicherry starts from a station called Egmore, which is 3km far from Central train station.

Looking for the right station

So we found a place to seat and put our bags and I went with my mom to see where we can get the ticket and from where it goes. Wondering trough station we found out that we have to go to other station that is near from where we will get to Egmore. We had to get out of train station, cross the road twice and the subway where on the other side we got to the small road leading, trough sellers with fried snacks, phone accessories and fruits, to a small station. There we bought a ticket to Egmore which costs 5Rs for a person and it works on any train going that direction, for an hour.

So, we came back and led everybody to the station. From the counter, we got to know that the journey will take 3 minutes but when we sat into train it was more like 1 minute.

While we got to the right station we still had 4 hours, so we decided to explore the city. To do that we had to find a Cloak Room and to our dissapointment the Cloak Rooms in Chennai needs you to have a locket for every bag you leave. We didn’t have locks and didn’t plan to buy them so we just found a place to seat. There we just sat and relaxed, from time to time someone went to explore the city. I went with my father multiply times to explore, ckeck restaurants or to just buy some chay (milk tea with spices). Finaly we decided to take all our bags and have some lunch/dinner at a nice local restaurant. We ate a Tandori Chicken (grilled, roasted chicken) with Parotha (kind of bread).

Full and happy we headed slowly to the station where we bought a ticket to Pondicherry and not long after we seated into a crowded coach. As we discovered; there is a ticket like we bought without a place and reserved with a place. Being unlucky we had to stand and sometimes seat on a bags in a very crowded car. We had to seat like that for 4 hours. 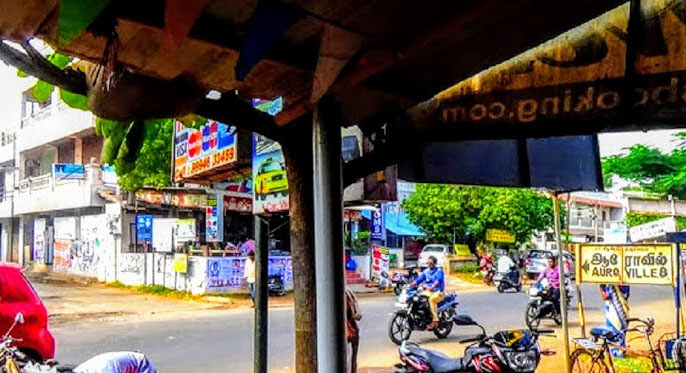 We arived to Pondicherry already at night and after a ride by rikshaw we found a hotel where we got a room for 1300Rs, which is little to much but it was alredy turist season and at that time everyhing is more expensive.  Justified by a price we had a great oportunity to take a long and hot shower which is quiet rare. In the morning 9 am we got the bags and went north by walk to catch a bus to Auroville.

Short 10 minute drive by a bus and we were in front of the east road leading to Auroville. There we ate a breakfast made of Dosai (kind of pancake), Chatney (cold and salty sauce for dosai) and Chay. Then we headed to our friend where got a house for rent.