Finally we decided to leave Bhedetar and head to Pokhara. 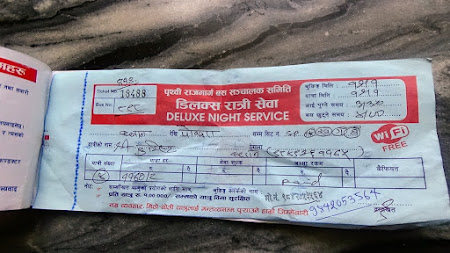 I have to bring up one more thing. On the ticket, there was written that we will have free wifi. But we didn’t. So whenever you see written anything free, make sure that it isn’t written there only to get your attention.

The bus departure was at 4pm but we were supposed to be there 3:30pm. So we woke up early in the morning, packed, and got ready. By 12 we were already in a van going to Dharan. It took us maybe like a half hour to get there from a village on a mountain called Bhedetar. Our way was going down from the mountain so we had a really good view.

At a bus station, everyone went to eat something except me, I left to read a book. After 3 hours we got to know that we were at the wrong bus station like everyone else. We had to take an auto (rickshaw) and pay 80 Rs. So we were kind of frustrated that they used the opportunity to withdraw some many from us. In the end, my dad gave the driver of the rickshaw 50Rs without any negotiations. For Nepali people it’s weird, almost funny, why white tourist doesn’t want to pay given them price… “but they always have so much money”… Which isn’t always true, as we know.

So we went into a bus surprised that there were only sits, no beds like the last time. The last bus we were in had sits and beds that were above them. We organized everything and waited for the departure. Some of us fell asleep and some were just admiring the beauty of nature on the road. Children were mostly playing. In the night everybody went to sleep.

When the very early morning came, it was still dark, we recognized the city. The bus started to stop every few kilometers to let out people. We came out at the end of the route at the bus station. We had time to drink some chay and to relax after a tiring journey. Waited for a while, and took a taxi.

The taxi took us to our friend’s house.