Today we had an audience with Karmapa.

Yesterday my mother had booked a private meeting with 17th Karmapa. One of our friends told us about this possibility. So my mom didn’t miss it. 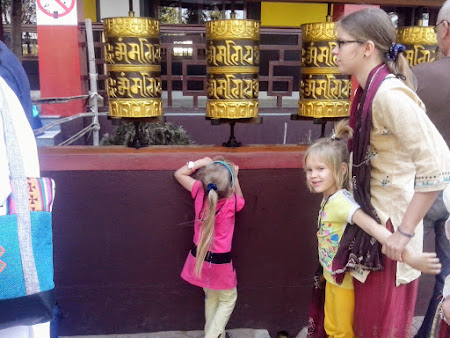 We got ready and went to the monastery 1 pm where we were suppose to get private audience with Karmapa. There we went to the office where they showed us where we were supposed to go. We still had time so we had made a round around and we got to see gompa. After that, we decided to go eat something. When we found a Tibetan restaurant not far from the monastery we saw that actually, it’s almost time so we came back and found a crowd of people standing in front of a building. Because of so many people we knew that it was there where was Karmapa. 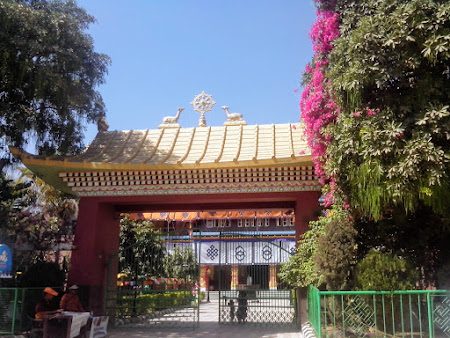 We waited 10 minutes and then they started to call names. Few names went and then they called “Dorota Volkov”. We climbed up small stairs and had to stand in the line. They checked if we have things like cameras, lights, self phones, laptops, guns, and a few more. They took away my father’s camera. Then we walked forward and there they took mine and my mom’s self phones. We were in a round room where were stairs going to another big room with many seats. 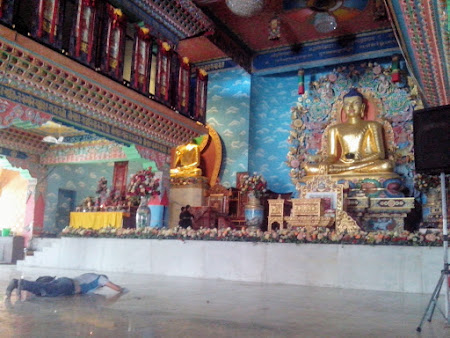 W had to wait for another 20 minutes after which we finely had stand in front of another room. My mom gave us our khata. The monk standing in front of a curtain gave us a blessing. But we still had to wait because there was a group of people inside the room. There was no door, only peace of cloth so we could have watched them from outside.

And when the room was finally empty we came inside. It was very hard to not smile next to the Karmapa. But he didn’t smile as in the pictures. And he didn’t look at us, he was just taking a short look with a corner of an eye on each of us. When we reached the middle of a room he walked towards us and looked at all my sisters and said “Wow, quite nutty.” My mom had laughed hardly. And then he just said “Hi” and we replied. I remember him touching Katia on the chin. But she didn’t know in what kind of situation we are. Then he grabbed some envelopes from the table and gave one to each of us. From the side came a monk with some chocolates which he gave to Katia. Then we had to stand to take a picture with him. We said “Goodbye” and went to the back of the room where we got a copy of the picture.

It wasn’t long. Maybe 3 minutes. But it was enough.

After that we went to eat something with happy expressions on our faces.