The price for a taxi from Thamel to Boudanath is around 300 – 400 Nepalese rupees.

To get to Boudanath by public transport, go to the stop called Ratna Park – every Nepalese passerby will show you the way – and there (crossing the walking pedestrian going from Thamel or Ason Market) ask the drivers about Baudha. A bus ticket costs 20 rupees. 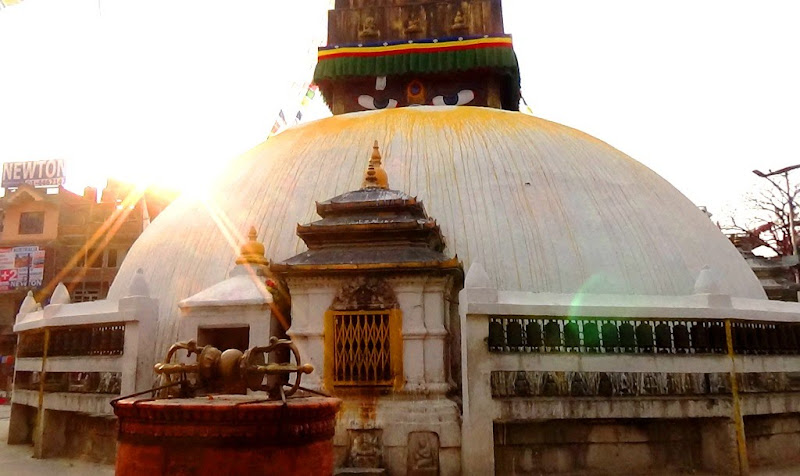 If you take a bus to Baudanath, a little earlier you will see a smaller stupa next to the road on the left. It is Chabahil Charumati Vihar, also known as Little Bauddha, which has also a long history as Boudanath itself.

Admission to the passage around Boudanath is paid for 400 rupees for foreign tourists, unless you are – even temporarily – a resident of the surrounding guest houses. This price applies to citizens of countries other than SAARC – namely India, Pakistan, Sri Lanka and several others.

The atmosphere is special – the air is filled with mantras, whether murmured by ubiquitous Tibetans, or from the loudspeaker in one of the many shops selling devotional items. Tibetan prayer flags are everywhere and it is clearly felt that a visit to this place is of extraordinary nature.

Strolling around the stupa, it is easy to see that the movement is done only one way – clockwise. It is through the ‘kora’, meditation on pilgrimages around the stupa and the prayer mills that increase the number of ‘Om mani peme hung’ mantras sent into space, it is accepted as a blessing. At any time, you can meet both Tibetan and Western worshipers performing Buddhist obeisances while repeating the mantra. 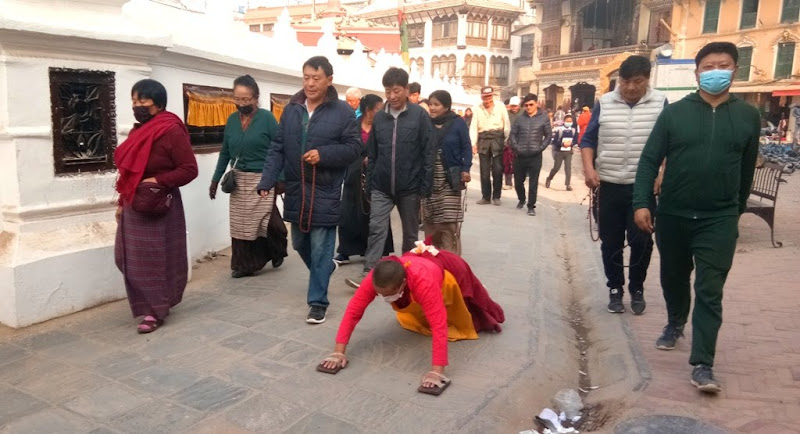 They occupy the first platform of the stupa itself or perform the ‘kora’ practice. Only some Western tourists coming here for the first time, or Nepalese teenagers who take selfies do not understand the importance of rituals that have been celebrated for over two millennia, and are the first to shoot photos of Boudanath in the background.

Almost half of the people walking around the stupa holds japa mala, usually Tibetans. They use the japa malas all day – also buying groceries or talking to people, which can be seen also by visiting neighborhoods around the stupa. It is also easy to notice the difference of clothing in this group: women are not only in the classic salwar kaiser (punjabi), but also in traditional Tibetan dresses of colored glossy material printed in Tibetan symbolism, highly tied at the waist – this is a holiday variant. Everyday dress of Tibetan women is the something like an apron lined on a skirt. Among the Tibetan men, hats are extremely popular. During the winter season, all kinds of sweaters and fleece are very popular. 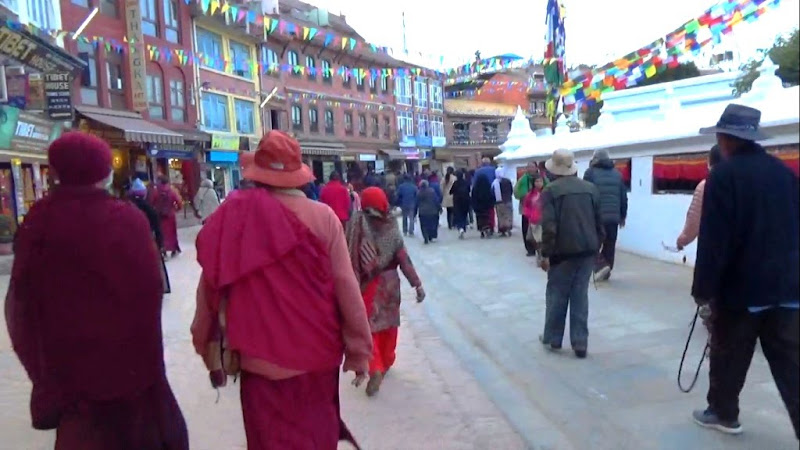 Around the Bauddhanath stupa there are many shops and restaurants offering – apart from of course wi-fi and beverages at inflated prices – a perfect view of the stupa or the exceptionally original dishes of Tibetan cuisine. The region is famous for its perfectly preserved Tibetan culture, which feels in every aspect of life in this district.

A total of over 50 monasteries of the tradition of Tibetan Buddhism were built around Bauddhanath. Many of them offer a wide range of services related to the skills of lamas trained in individual monasteries. You can meet here the medical clinic of Sechen school, retreat centers with extensive hotel infrastructure, and schools of painting traditional Buddhist tanka.

Those interested in exploring the Buddha’s teachings or learning to meditate or simply enjoying the atmosphere of mental silence have a wide selection of Buddhist schools to choose from. On the northern side of the stupa, an old map describing the placement of some monasteries is painted on one of the walls.