According to the Hindu cult, the puja for Shiva is made every morning and evening.

The offerings are made of what brings a good impression in the cold region of the Himalayan foothills – light, clean water, the smell of incense, flowers, fire, and delicacies. The lingam – Shiva’s symbol – is commonly worshiped as a source of power and a symbol of greatness.

The social life of Hindus in ancient times did not bring so many conflicts as much as they do today. The magnificence of Shiva and the beauty of Parvati were nurtured not only during the puja but also in the home bonfire of members of the family. Every man perceived his wife as a beautiful and wise Parvati, and every woman worshiped her husband as Shiva.

Thus, equality was common in society – everyone were equally justly provided by life. Because such emotions as jealousy and envy did not exist in the same amount as now – human sexualism was not taboo. There was no tension associated with it, phenomena of rapes and adultery and stubborn pursuit of power.

This culture of worshiping Shiva and Parvati is still found in some societies.

Of course, wars over the years have happened, but the percentage of souls who have been driven by this kind of emotions was much smaller. Until the advent of an age of Kali Yuga.

A legend is known about the creation of the Pashupatinath temple in the Kathmandu Valley. According to her, one day Vishnu took the form of Buddha and meditated on the top of the Mandihatu mountain. A fire burned around him, and the Sun shone at the top of his head. Vishnu’s meditation was so intense that in effect the Manimati River was created.

Parvati appeared in front of the meditating Buddha in the form of Buddhist dakini, Vajrayogini. She gave the Buddha goodness, satisfaction and pleasure.

According to this legend, the Buddha expressed a desire that Buddhist practitioners should live in the holy region of the Kathmandu Valley. Parvati, offering her sacrifice to the Buddha, said that in this sacred place Hindus and Buddhists would always live in harmony. Then she asked him to set up a sacred lingam, a symbol of power and peace, at the confluence of the Bagmati and Manimati rivers. At that time, Buddha established Karunikeshvara in that place.

There, where the Pashupatinath temple stands today, a golden city named Maheshvarepuri or Pashupatipuri was established. In the center stood a gleaming gold lingam. At the end of the era of Dvapar Yuga, the golden city began to change into stone, decaying wood and clay. With the advent of Kali Yuga age, the shining lingam sank deep into the ground. 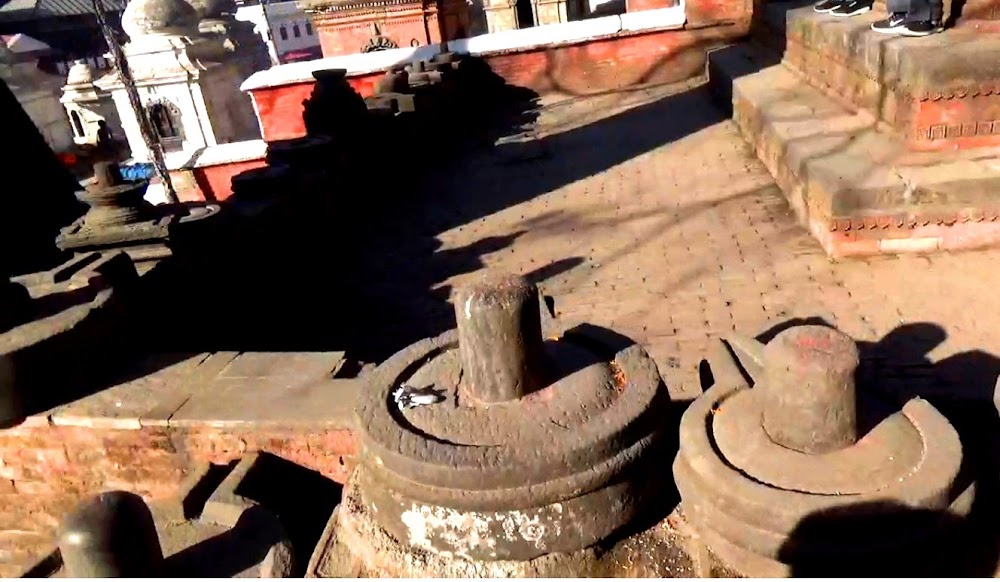 After many years, the lingam was found by Kamadhenu, a cow fulfilling wishes who had taken refuge in a cave in the Chandravan Mountains. Each day, Kamaden descended into a valley where the buried lingam lay and gave her milk to the earth. After many years, people noticed Kamden repeating her everyday routine. In so doing, they found in the earth a holy lingam that freed from sins and the circle of birth and death.

Since then, the Lingam is – the only one in the age of Kali Yuga – a link connecting people to perfection, purity, and power.