– usually falls on the second, sometimes the third full moon after the winter solstice – in the Bikram Sambat calendar. This calendar is an ancient Tibetan-Chinese lunar calendar. So Sonam Lhosar falls the next day after the new moon of the month, Magh – on the day called Magh Sukla Pratipada. 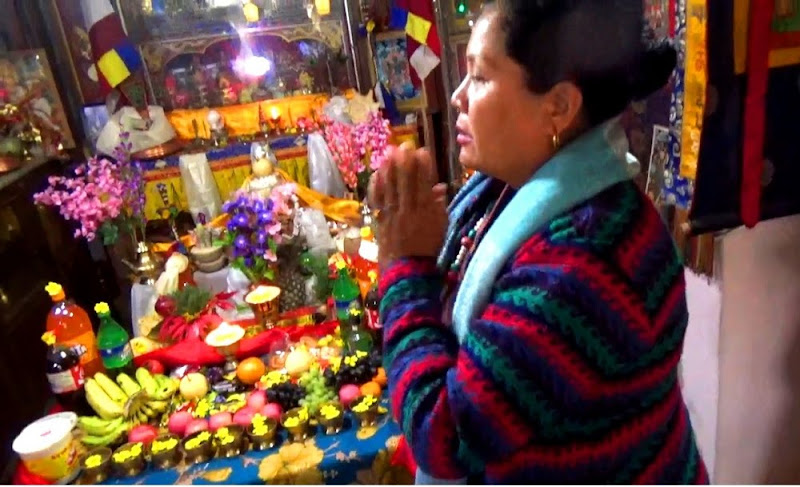 Those who celebrate Sonam Losar are also guided by the symbolism of 12 animals associated with particular years, just like the Chinese. So – according to the Bikram Sambat calendar – on February 16, 2018, the first day of the Earth Dog Year occurred.

In 2018, the New Tibetan Year was celebrated on February 16. The festival lasts for 15 days, but the first three days of the New Year are celebrated first of all. The first day of Losar is a day off from school. On the third day of the festival – which in 2018 took place on Sunday, in Nepal, weekday – children were going to school.

In Tamang language, the festival is called “LOCHHAR” – it is a combination of two words; “lho” means year, and “chhar” – new wishes.

Tamangs are starting the preparations for the festival in the last days of the twelfth month of the old year. They clean the property and decorate them to welcome the new year. The house must be thoroughly swept, which symbolizes “sweeping away the bad fate.” Doors and windows are decorated with colorful and shiny decorations that contain the wishes of prosperity, happiness, and long life. They prepare the right amount of rakshi (Roxi) – a home-made alcohol – to welcome Lhosar together with friends. The New Year’s ritual is to buy new clothes and dress them on the first day of the festival. Buddhist monasteries make rituals for the well-being and distance of “negative forces”, in last days.

New year dishes are prepared at home. Among the Tibetans, the most important New Year’s dish is Guthuk. Guthuk is a soup with dumplings, which must contain exactly 9 ingredients associated with prosperity in the new year. These include meat, sweet potatoes, curd from yak milk, rice, wheat, peas, chili, radish and vermicelli noodles.

Both the Tibetans and the Tamangs are obliged to prepare the New Year’s “khapsey”. Khapsey are deep-fried biscuits that are offered to the buddhas and housekeepers. The variety of this type of delicacies is large and depends on family traditions or caste. Among the Tamangs, the obligatory khapsey is a festive version of sel – rice flour donuts popular all year round. Tibetan khapsey are different: from huge “bhungu amchoew” shaped as donkey ear, frosted “mukdung” braids, crispy “bulug” balls, to different shapes of small biscuits called “kaptog.” During the festival, it is difficult not to meet children running on the street with a festival kaptog in hand.

During the first days of Lhosar, families gather to eat a festival dinner and various sweet desserts. A house of friends and a distant family is visited with a bottle of rakshi in a hand clothed in a festive khata – a white or colored scarf, meaning blessing and good wishes. Among the Tamang, are eaten dishes made of for kinds of meat: buffalo, goat, pork, and chicken. Tibetans eat New Year’s guthuk and meat dishes. 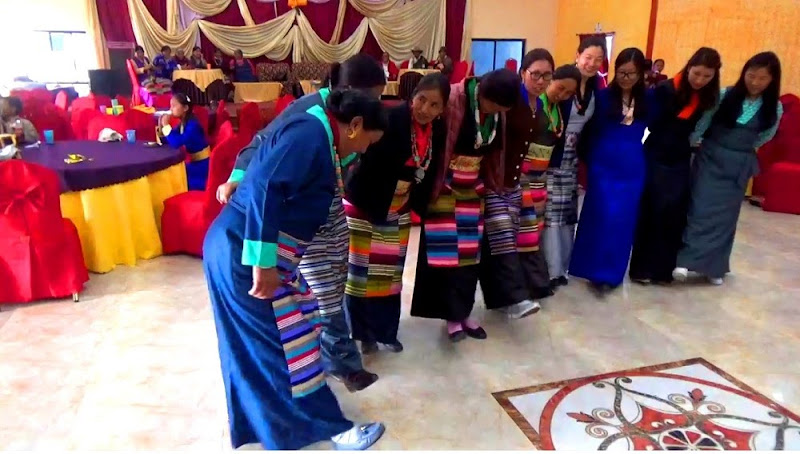 Tamangs are known for their music. During concerts, occasional events or street performances they always use their traditional drum “damfu.” Damfu is small, round, covered on one side with goatskin. Two small bamboo sticks are used for its construction. Songs of the Tamangs – called “Tamang Selo” – are known for their brilliant texts that, at the same time, carry a deep philosophy of life.

Returning from our New Year’s trip to Kopan Monastery, we met partying Nepalese. Tibetans gathered together in beautiful Tibetan clothes, sang songs, and danced their traditional dances in a circle. 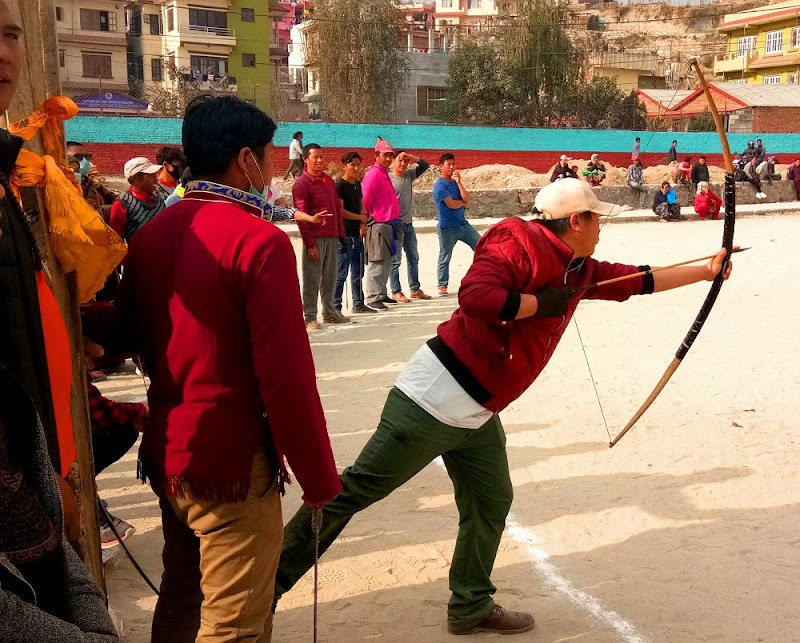 At the next event, the same the day, we met Nepalese in a mixed company – Tibetans, Newari, Tamangs, Bahuns, Chhetri, and Sherpa together playing, feasting, shouting and watching a girl dancing on stage clad in a red, shiny, long dress.

Then we also saw gathered men shooting from the bow, most of whom were Tamu (Gurung) people. One of them told us that they had come to Kathmandu for Tibetan Samu Losar from their villages in the Annapurna foothills, and the archery game is their annual tradition.