The Boudhanath stupa is located about 7 km northeast of Thamel – Kathmandu city center, near the ancient trade route leading from Tibet.

The stupa is 44 meters high, the stupa dome is about 7 meters in diameter. The area of the stupa is approximately 6,756 square meters.

Bauddhanath is one of the largest and most significant Buddhist objects in the world. Today, it has become one of the main goals of pilgrims of all Buddhist traditions, thus becoming the center of the thriving city of monasteries, hotels, crafts of Buddhist devotional objects, a center of Buddhist worship and Buddhist studies. The influx of a large number of refugees from Tibet has contributed to the construction of over 50 Tibetan monasteries of various Tibetan Buddhist schools around Boudhanath.

It is believed that the Bauddhanath stupa contains relics that are remnants of the Kassjap’s buddha, hence the Newari call it Khasti. It is also called the Stupa of Enlightenment or Bodhi Stupa. Tamangs and Tibetans call this stupa Cha Rung Kha Shor, which is associated with one of the most popular in the Buddhist community, legends written by me below.

After the death of Buddha Kasjapa – a sage who gave teachings even before the Buddha, Siakyamuni – a poor widow named Jajima found the remains of this great sage and buried the relics with her four sons, making a great mound. Jimaima was going to make a great sacrifice to the buddhas with only a little, hard earned savings. She was a woman of a low caste who carried out dirty work, which was not undertaken by people of higher states. 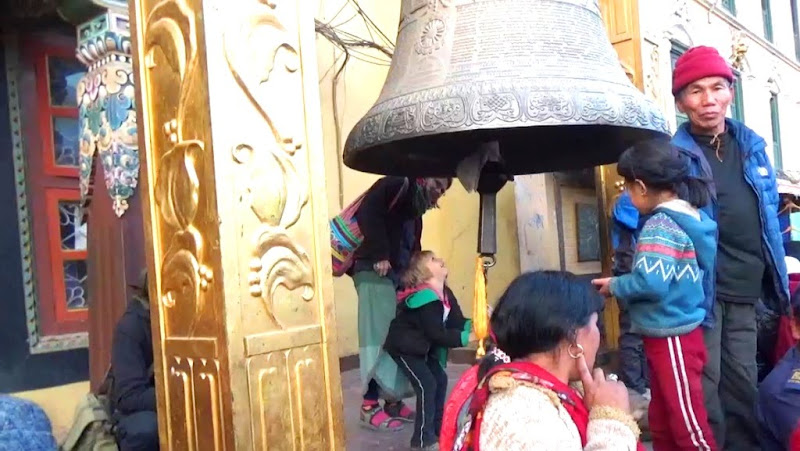 Jimaima had four sons – Tajebu, Phajebu, Khijebu, and Jyajebu – with whom she planned to implement her plan. She then went to the king who ruled at that time in that region and asked him to give her a land for the construction of a stupa. The king decided that – although she was a lowly person in the social hierarchy – for such a noble goal he should fulfill her request. He told the widow that he would give her the amount of land which will cover the skin of one buffalo. Jajima cut the skin into thin strips, tied them together, and she obtained a rope with which she circled the land with a size close to the standard surface of the playing ground.

King’s advisers were astonished at this turn of events and intended to distract him from the fulfillment of the promise, claiming that if this miserable woman was allowed to complete the construction of such a great tower, the king himself should be built a mountain-sized building. And he replied, “I agreed and I can not withdraw it” – which in Tibetan language is – “Cha Rung Kha Shor” – where did the Tibetan name of the stupa come from.

Tajebu, Phajebu, Khijebu and Jyajeb worked hard for three more years to build Bauddhanath. It is believed that thousands of Buddhist believers and celestial beings evolved into Buddhist monks while working on the Bauddhanath stupa.

The widow’s sons were reborn according to their wishes.

Tajebu wanted to be reborn as the ruler of the northern region to be able to create favorable conditions for the development of Buddha’s teachings. According to the application, he was reborn as a Tibetan King Trisong Detsen, whose reign – according to historical data – dates from 755 – 797 AD. and the construction of Bauddhanath is attributed to this period.

Phajebu wanted to be a scholar – he became an enlightened teacher in Tibet, known as the bodhisattva of Shanta Rakshita.

Jajeb prayed to become a minister to protect the Buddha’s teachings in the north – he became the Minister of Bhamitisi.

The oldest historical references to the Boudha stupa were found in the Newar Chronicles. Boudha is listed there as one of the four stupas builded by King Licchavi Vrisadeva or Vikramjit around the year 400.

There are still many stories and legends about the origin and history of Bauddhanath.

According to the Chronicles of Gopal Raj Dharmadeva (around the 4th century), the origin of the stupa is attributed to Manadeva, the son of King Dharmadeva as a propitiation for the terrible act of murdering his father, which is also a popular legend.

King Dharmadeva installed a water source with the ancient technology of Narayanhiti – acquiring rainwater from the ground – but water did not come. So the king consulted with his astrologers and they told him that for the water to flow, the sacrifice of the most virtuous man in the kingdom is required. After having diagnosed the area in his kingdom and obtaining unsatisfactory results, the king decided that only he and his son would qualify as sacrifice. The old king had decided that he himself should die and he instructed his son to decapitate with one blow of the sword a figure which he would find in the vicinity of the palace wrapped in cloth at night.

Prince Manadev was obedient to his father’s command. But he was horrified when he saw his father’s head fall under the sword. After this act he went to the temple of Vajrayoginia in Sankhu. Vajrayogini told him that the only way he could rectify his offense is to let the rooster out, and wherever he lands, build a Stupa for his father. The rooster landed in Boudha, and King Manadeva built Bauddhanath there.

Manadeva was the great king of the Licchavi family, military conqueror and patron of the arts, which ruled Anno Domini 464 – 505. He is also related to the origin of the Swayambhu stupa, the second large stupa still standing in the Kathmandu Valley.

Also to another great king of the Licchhavi family, Shivadewie ruling in the years 590 – 604 is attributed to the reconstruction of Boudha.

Finally, in the archaeological report of Sakya Zangpo, a Tibetan conservator from the 16th century, there is information that the relics of King Amsuvarma Lichhavi have been found in the stupa.

In today’s structure, the stupa was probably created after the Mongol invasion in the fourteenth century. 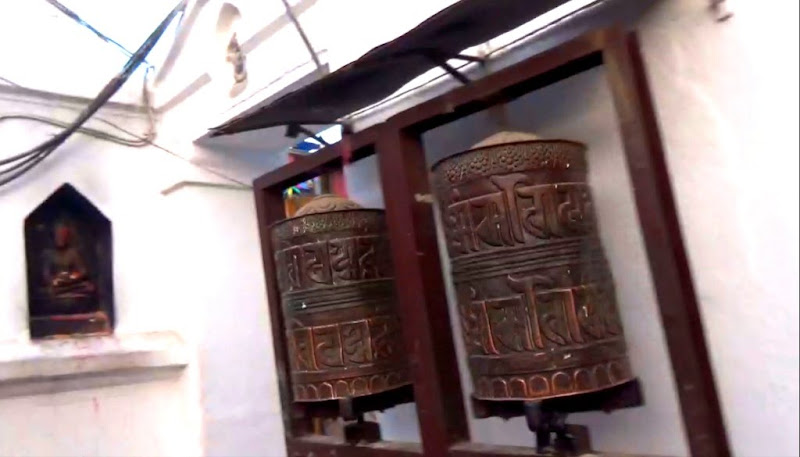 The contemporary reconstruction of the Boudha stupa is attributed to the work of the Buddhist tradition of Chiniya Lama. In 1859, Prime Minister Rana appointed the venerable Chiniya Tai Fo Sing as a priest who was in charge of the stupa. He and his students had a great contribution to the renovation and care of this great stupa. In later years, also many other masters played an important role in the restauration of this great stupa.

Among the people who worship and preserve Baudanath, the Tamang community forms the base. However, the Tibetan community is now the dominant group in amount and the most active. The Newari and Sherpas are also part of this great community gathering around the stupa. Also many other ethnic groups, as well as Westerners, maintain this ancient place of worship as living and holy today, as it was centuries ago.

The price for a taxi from Thamel to Baudanath is around 300 – 400 Nepalese rupees. To get to Baudanath by public transport, go to the stop called Ratna Park – every Nepalese passerby will show you the way – and there (crossing the walking pedestrian going from Thamel or Ason Market) ask the drivers about Baudha or Baudhanath. A bus ticket costs 20 rupees. Admission to the passage around Bauddha is 300 rupees for foreign tourists.

Nearby, about 2 km before Baudanath by the bus from Ratna Park, in Chabahil – once a village, now a transport hub and a city region – there is also an ancient, much smaller stupa of Chabahil Charumati Vihar also known as Little Bouddha.