Railway connections across the border are two:

Check-in takes place at the railway station, so that the delays of these trains are not large. Tickets for them are bought only and exclusively with a Bangladesh visa in hand. The trains are air-conditioned.

The alternative is to cross the border on foot. From Calcutta to the border you can take a bus or a suburban train.

We chose the train. Sealdah – Bangaon Junction Local leaves almost every hour from Kolkata Sealdah station. The station is located about 3 km north of the High Commission of Bangladesh. We paid 80 Rs for four places.

The trip lasted 2 hours. We got to the Ladys Only wagon, but the head of the family settled with rest of passengers. Actually, buying four tickets was not very important, because we sat together with other ladies like herrings, enjoying our seats.

However, the movement in the wagon was so large that the vendors offering various attractions were constantly changing and we had a good overview of the offers that made the trip more pleasant. So it was jewelry of all kinds, cloths like cloths, towels and scarves, women’s scarves and lunges for men, next hangers with various trinkets such as key chains, stationery, small toys for children, knives, penknives, household appliances and all that was hung in front of us. In addition, there came a student who sold practical covers and various document folders – contrary to appearances, a very practical thing while traveling. There was a large offer of snacks: a lentils with raw cabbage, chilli, onion, various kinds of nuts, cookies and beverages. Blind singers also came. These attractions were slightly different from the classic Sleeper Class on long-distance trains. So the journey passed in the blink of an eye and we quickly landed in Bangaon. 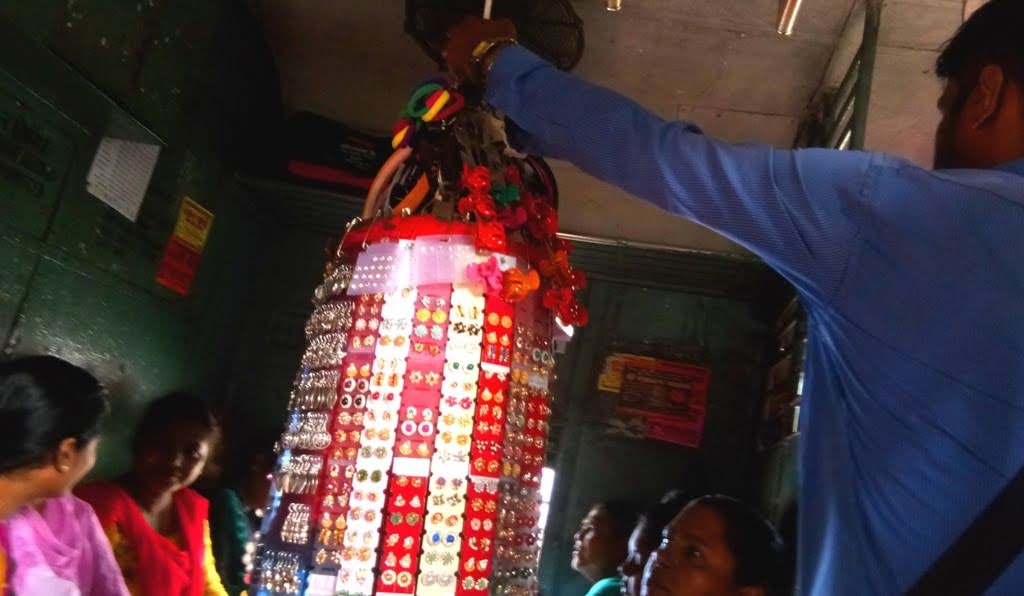 The jewelry offer on the Bengali Railway

There, following the long platform in accordance – along with the other travelers – we ignored the crossing with a mountain for pedestrians and went along with the Indians across the tracks. There were rickshaws waiting for us. To the border crossing in Petrapol –  India Check Point – we arrived from the station paying for all our brigade with luggage 150 rs. It was around 10 o’clock.

Everything took us about two hours in total. We spent about 40 minutes in the Indian Immigration Office sitting in an air-conditioned office with a ceiling fan – it was cold for us – waiting for stamps to be checked out and answering various kinds of questions probably from curiosity. In the end, we were photographed and sent to Bangladesh.

We moved away from India. In the queue where the Indians were standing, the official waved at us and, throwing only a glance at the passports, he let us through the gates. On the other side, the world seemed a bit different. We found ourselves on a wide square, where there were swarms of some party activists in red and green clothes. It seemed that preparations for an event were underway. Having passed duty free shop, we entered the following immigration office of Bangladesh. There, we sat on the chairs to rest after the hardships of the border crossing.

However, it was only half of everything. Dad and I as a translator were taken for questioning like ‘where are we going’, ‘are we going to Dhaka’, ‘what is our budget’, ‘how much costs a ticket to Russia’, and many more. We thought they wanted to get something from us or use us but it turned out, much later in Khulna, that they asked us for a reason. When we finally returned we gave our bags through the scanner. There sat a men who made a review of the contents of our backpacks. They have chosen our youngest Ania to tease. However, she unceremoniously showed her tongue to the border guard. He was a bit stunned, but his friend kindly addressed to our girl in the following words:

So greeted in this country effusively, we headed to the exit door. Next, there was another duty free store and a lot of shipping agents inviting us in various parts of Bangladesh. The time was around 1 pm

Indian visa in Bangladesh can be obtained only in two cities – in Dhaka and in Chittagong. The remaining Indian Visa Servive Centers, which there are many in this country, are for locals. 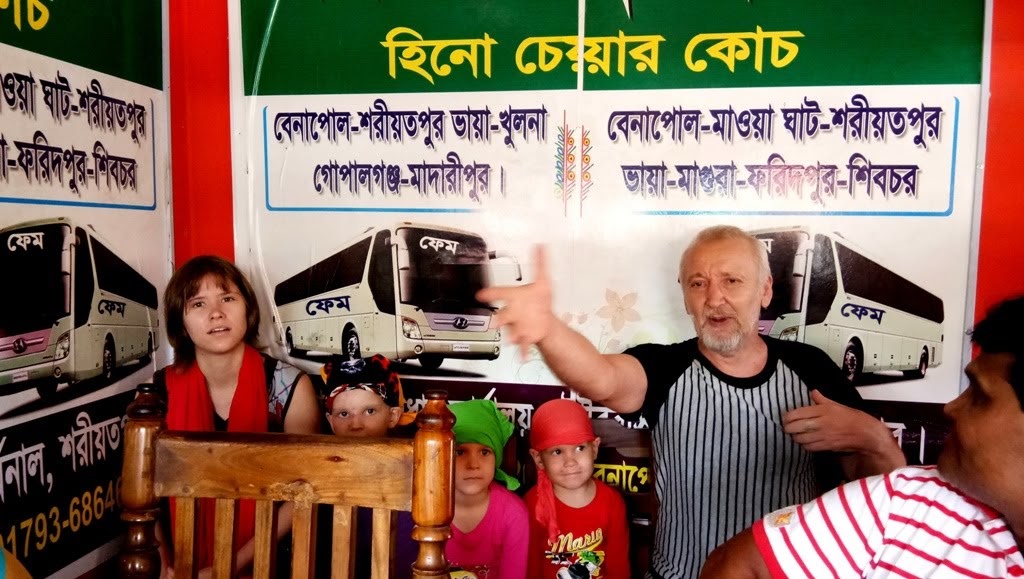 We did not know about it, so without being the lovers of the metropolitan smog, we chose Khulna – a small town not far from the border. Three hours away by bus. Our bus departure was at 2 pm.