While we wandered around, on the hill, our father called us to see something great. 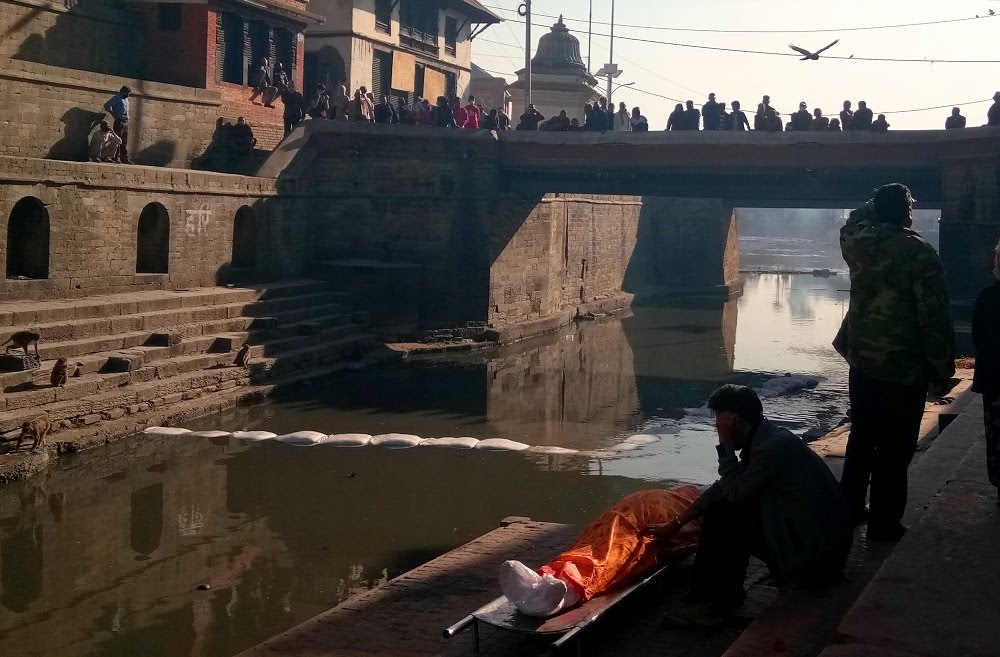 We went to see what he was looking at and on the edge of a hill was a barrier, behind which we could see something magnificent. We didn’t know what it was but it was very, taking the breath. There was a river and small stupas each one next to other and they were beautiful, whole white. Inside there was a place for meditating. That was what we sow. It looked like a sacred place, not from this Earth. After we discovered that we can go there. We found stairs going down to some small stupa. There we made few pictures and videos and discovered the way going to this great place. 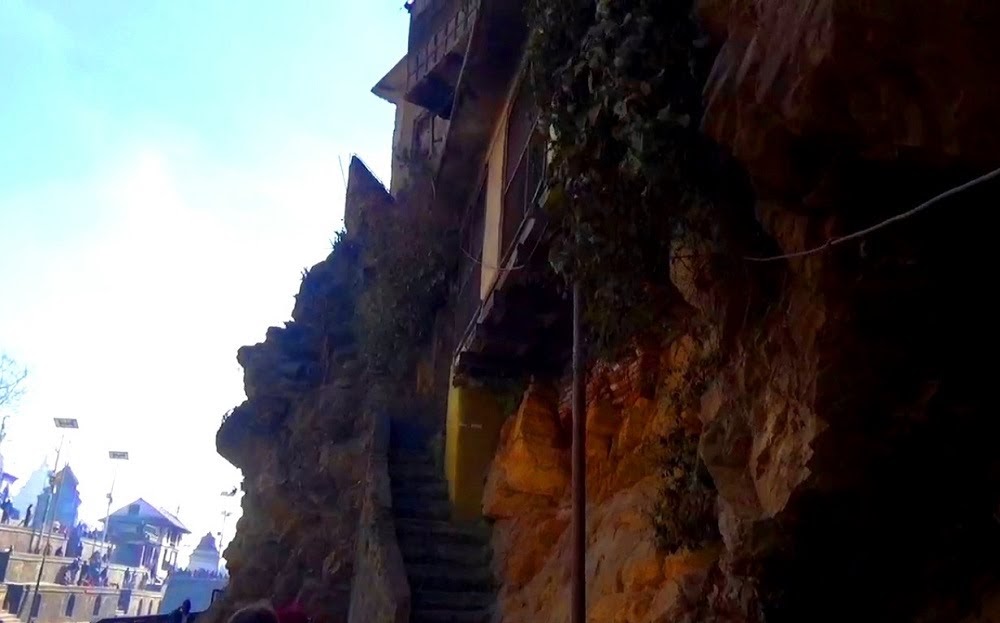 We walked next to a quite dirty river and on the other side, we could see a house on the wall. We admired it but didn’t go inside. Next, we entered the Pashupatinath temple. While going down the stairs, tourists told us the name of the place but at that time, it was so difficult and long, we didn’t remember it. First was an old house on our right and then the bridge on our left. We spotted more monkeys and then found out that the place was full of hem. I counted more than 32 monkeys all over the place. My sisters ran everywhere screaming and laughing trying to find or catch one of them. I saw one monkey steal something from a hand of a standing man. I, on purpose to lure one, put a candy in my hand hoping to take attention of a monkey. But I didn’t have that luck. 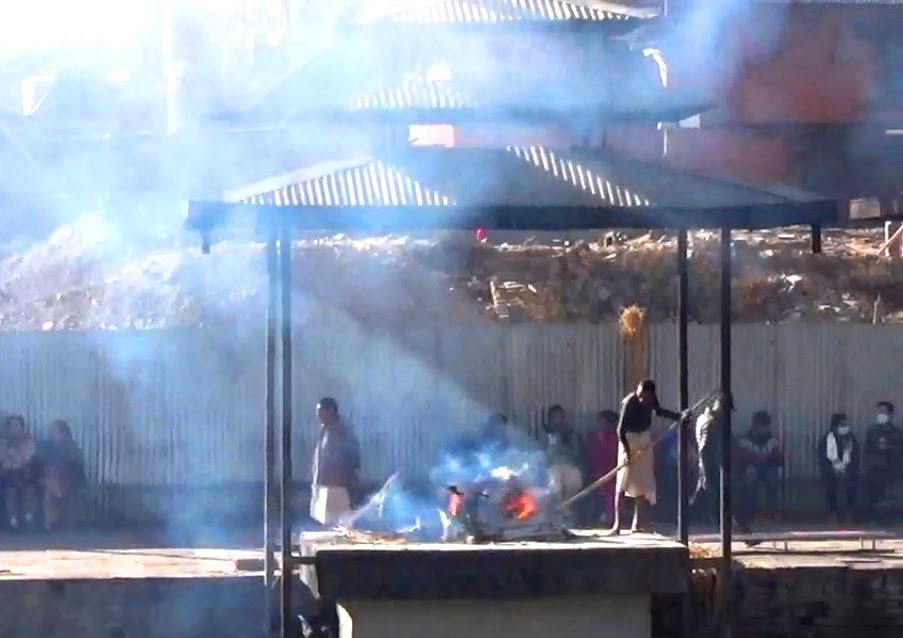 We walked next to other small stairs leading to a big gate. Somehow we didn’t go there just passed and went ahead. We walked next to another bridge and small downstair led us to a place where were stacks with burning bodies. The big smoke was going u,p, covering the sky with the smell. And now we knew why it smelled with grilled sausages.

People stand there not laughing but not crying. They looked at us, while we walked past them, and sometimes someone smiled. Then, the way had more of stacks and ended, so we turned around turning to the second bridge. There, in front of the bridge were big stairs up. We didn’t go that way, we turned right. When we walked a group of policeman passed next to us. I got interested, as it must be a big and important place that police goes there. And as we discovered later, it is the biggest Hindu temple in Nepal.

The way wasn’t interesting so we turned left to the way leading backward but up. We entered a place where men in orange clothes, were sitting, talking or smoking. They are called sadhu or baba. There were many of them. Sometimes there were women carrying wood or bringing food. The way was long with a lot of eyes on you, and then we got to the big stairs I talked about before. There we met monkeys, again, jumping around looking for something to eat. Immediately I took a sweet and gave to one and again and again. 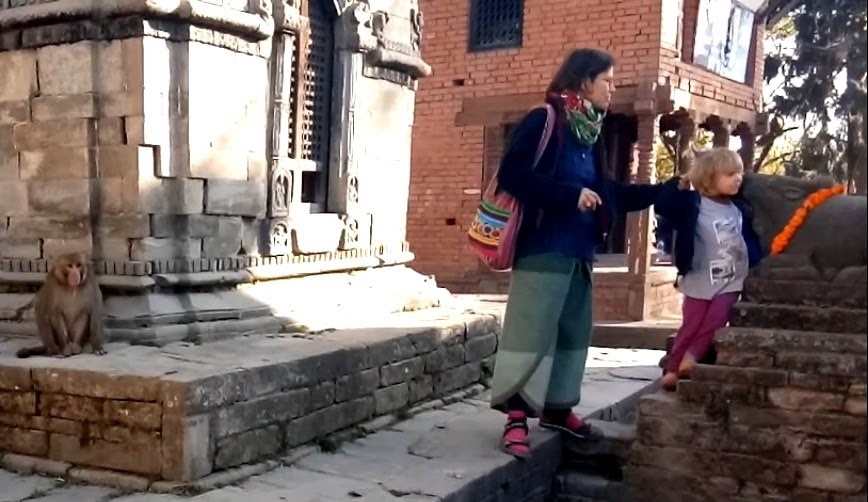 Then we had to turn left, there was another complex of temples. There we met one very mean monkey that unhappy with, not getting the sweet, stole Ania’s (my littlest sister) flowers that she gave to a stone bull, Nandi. She rushed after the monkey to get the flowers back but the monkey was already on the hill. So she just picked up the monkey’s lost flowers and gave to the other Nandi. The statues were in front of each temple. The temples weren’t big and there were many of them. At the end of the temple was one big building with Shiva’s trident in front. There my father helped men with cutting the big piece of wood. And then we went ahead.

On the way, we called a few bells and then the way wasn’t as interesting as all before. On the side was grass on the other barrier with monkeys on it. There was another story of a monkey.

I gave a candy to a monkey (it took it from me, more precisely) and ran on the other side of the road. – Happily, my father made the whole video of this. – Then while opening the candy we heard a shouting of another monkey. All of them ran away and it came to us. – After we understood that it was the biggest one of them and it was angry that someone else got a sweet. – It sat in next to us on the grass. It was big and scary, not that scary. But even I was kind of afraid of it. My father was just next to us and he shouted at the monkey and it got scared and in no time it made few steps back, sat, and started to eat leaf that just fell on the ground. It was quite funny as it just, a moment ago, wanted to eat a candy looking at us with its scary eyes.

Laughing we went ahead going already down. Then the stairs started leading down trough statues, bells and ending at a crossroad. One side was going down to the road and the other to the side to some Hindu temple. It was written there that only Hindu people can enter the place. We didn’t look at it and went in. Just in time came a man running towards us leading us out telling that we can’t go in. I was quite angry but what can I do. Mostly I was angry because how did he know if we are Hindu or not. We are not Christians. So we went the way downstairs. The way ended on a big road. There was a big gate decorated with tantric sculptures. As we know it was the temple they didn’t let us in.

We crossed a small bridge, then the road, and stopped in a shop, quite thirsty. Then I used google maps and led everyone home, while, again, we walked trough the alleys. On the way, we bought our socks. And we were very interested in what we just sow.

Our journey to find socks came out to be the journey of unexpected surprises.