Name of Kalachakra: Circle of Time.

Kala – means time is an aspect of unchanging bliss.

It is Kalachakra Outer, Inner and Secret. Outer Kalachakra is the world around us: mountains, rivers, valleys, trees, houses, sky, stars and planets. Inner Kalachakra are the stages of initiation practice and the anticipated initiation stage. Sekretna Kalachakra is the body of the unit with a system of canals and pranines. The meaning of all three Kalachakras is encrypted in the ten letters of the indigenous mantra.

In the Kalachakra Tantra, it was described, as on the fifteenth day of the third month of the lunar calendar, a year after the Enlightenment, Buddha Shakyamuni delivered the Mahaprajnaparamita sutra on Mount Sępa.

At the same time, he manifested himself as Kalachakra near the Sri Dhanyakataka stupa in southern India and handed over the teachings of Kalachakra Tantra to King Suchandra, ruler of the kingdom of Shambhala. According to another version, the Buddha taught Kalachakra tantra also a year before his departure in Parinirvana.

… Kalachakra, in an alliance with his partner Vishvamati, manifested before the king in a three-dimensional palace filled with a divine retinue. There was also a second mandala depicting the cosmos with planets of the Solar System. It is claimed that the whole initiation for King Suchandra took time equal to one click with his fingers. 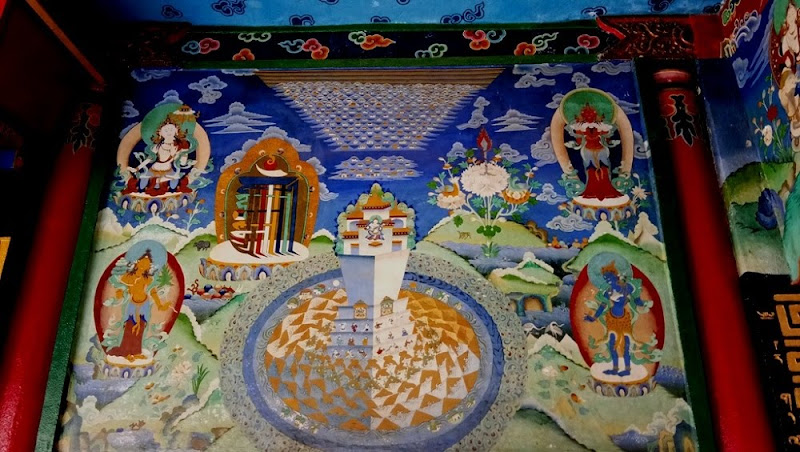 Returning to Shambhala, King Suchandra raised the three-dimensional Kalachakra mandala in the royal park, he diligently practiced tantra, and after accomplishing it he passed this cycle of teachings subjected to his kingdom. The ruler also created the verses of the Kalachakra Tantra in his native language with extensive commentary on the subject. The Native Kalachakra Tantra consisted of 12,000 verses.

The teachings of this Tantra were passed from the king to the king along with the inheritance of power in the kingdom of Shambhala and it is said that subsequent kings ruled the country for a hundred years.

In the seventh generation after the rule of King Suchandra, this practice was handed over to another ruler, Manjushri. He, in turn, formulated a short Kalachakra tantra, and his son and heir Pundarik wrote a commentary on the subject, entitled ‘Vimalaprabha’, which means ‘Immortal bright light.’

These two texts came to India thanks to two yogis: Tilopa and Kalachakrapada the Elder.

In the tenth century, the Indian Mahasiddha, Tilopa by supernatural power, reached the kingdom of Shambhala and received there the initiation of the teachings of Kalachakra from the king of this mystical country.

Kalachakrapada tried to reach Shambala independently of Tilopa, and after experiencing a clear vision of the country he received the transfer of the Kalachakra initiation.

These two yogis were the first to disseminate the teachings of Kalachakra in India. Kalachakra Tantra quickly gained popularity at monastic universities in the central part of the Ganges valley, and was soon practiced in the Kashmir monasteries. As a result, four styles of Kalachakra practice appeared.

The first two chapters concern the external and internal time cycle, and the last three are the variable cycle, or ‘other’. In the third chapter the initiation is discussed, in the fourth – the initiation stage, in the fifth – the stage of completion and the achievement of Awakening. All subsequent comments on Kalachakra are comments on these two texts and have the same five-fold structure.

In the period between the 11th and 13th centuries, three Kalachakra transmission lines with various contents of four Indian versions of the work arrived in Tibet. Small differences were also due to translations.

These three lines – in different versions – have survived in Tibet to this day. Initially, Kalachakra’s message existed in the Sakya and Kagyu schools, then he also appeared at the Gelug school.

In the Nyingma tradition, there is no direct transmission of these teachings. Later Nyingma Lamas received the Kalachakra initiation from other traditions of Tibetan Buddhism.

There are different methods of practicing Kalachakra. There is a practice of Kalachakra meditation in an anthropomorphic figure with two hands, but the main form of the practice is the figure of the twenty-four-handed Kalachakra. Kalachakra’s body is black or dark blue. It has four faces: white, red, black – or dark blue – and yellow, which refer to four levels of existence: body, speech, mind and deep consciousness – and also from four elements: water, fire, wind and earth. The faces are directed to the four sides of the mandala palace, in which the ceiling, walls and architectural details are painted in the same colors as the faces facing them.

Vishwamata, Kalachakra’s partner has eight hands, the color of her body is yellow. She is naked and decorated with five symbolic ornaments. It has four faces directed in the four directions of the mandala.

Kalachakra’s long hair is tied to the top of his head and decorated with a wish-fulfilling jewel and a sickle moon. Yidam is clothed with jewels and tiger skin fastened around the waist. The figure of Vajrasatva sits above its form among the tongues of fire in five colors.

The Kalachakra tantra is distinguished by:
The external cycle of time – is a continuous flow of changes at the external level, at the level of the surrounding world and its objects.

In the Kalachakra Tantra, it is said that the inner wheel is inseparable from the external cycle.
These two cycles of time make up the circle of Samsara – near the endless cycle of life and death. These cycles are controlled by forces called ‘karma shafts.’ Karma arises when the mind clings to phenomena which is connected with the conviction of the existence of reality, the phenomenon of ignorance and ignorance. By ‘painting’ your mind with the colors of different clinging, we identify these ‘colors’ with each other. The newly painted preferences take root in us in the form of a tendency of karmic consciousness and tendencies. Under appropriate conditions, the experience thus formed – determining the particular tendencies – begins to act as forces that force us to perform certain activities without the participation of consciousness. In this way, our karma is established.

The outer and inner Kalachakra are what needs to be purified. 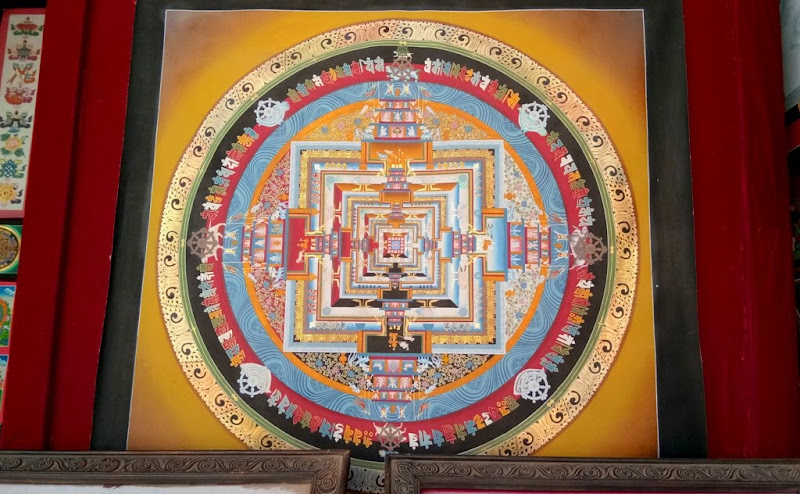 The Secret Aspect of Kalachakra includes the full study and practice of the Circle of Time – meditation on this unified aspect of Buddha along with its mandala.

While the external phenomena are related to the internal world of man, his psyche and body, he himself also changes to the world around him.

By developing inner peace, we can achieve harmony in relations with surrounding people, expand the space of loving charity and compassion in the world. On the other hand, if some external conditions favor the maturation of certain karmic potentials, other external conditions prevent it. Kalachakra’s astrology is aimed at determining the favorable time of various undertakings, which allows harmonizing the internal human energy with the external energy of circumstances. The Kalachakra astrological system was the basis for creating the Tibetan calendar. Read about the rules of the Tibetan calendar.

Tantra also contains a doctrine on the internal structure of the subtle human body – or generalizing – the psyche. In order to enter Kalachakra’s deep practice, the practitioner should be aware of the structure of his spiritual body, energy channels and pranas moving in these channels.

Leaving all these scientific definitions, let us briefly summarize that Kalachakra is simply a universal university that speaks of our external world, the conditions in which we live and all phenomena that surround us, our inner world – the functioning of the body, speech and mind – and how it is transformed internal world, which in general is inaccessible and can only be realized through direct understanding.

To this day, the line of continuity in transmitting Kalachakra’s teachings is uninterrupted. His Holiness the 14th Dalai Lama gives Kalachakra initiation all over the world. The practice of any tantra, however, is possible only after the initiation, which can take place after the previous adoption of specific vows.