On Saturday morning I heard a great noise on the street informing about another party.

I caught my camera, ran and saw crowds of women dressed in red, fast-paced with jugs on their heads.

Nepalese asked what this party is about, are saying that this is not a special occasion and not a festival at all. Pressed by the question about events, they say – Sapta. The word ‘sapta’ means seven and symbolizes the seven days in which this event takes place.

Sapta is associated with the Hindu tradition. All these women have gone to a place, in our region of Kathmandu, called Simaltar. There, next to Siva’s little temple, stands a tent decorated fot ceremony, where the program takes place for seven days. Its main element is listening to the story from the holy book of Bhagavad Gita.

Sapta has been organized for three years. The idea of ​​the event was initiated by the need to collect finance after the tragic event in 2015, which was the earthquake.

The puja celebrated daily during these seven days is an important meeting at the local community forum. People gather to sing together, listen to story and treat each other with delicacies. They usually bring what they like the most to offer Shiva, and after the puja together, enjoy the prasad.

The 7-day long puja can be made by any family to clear all the bad and bring prosperity to the family.

The context of the event

Money is also offered. From the collected money is planned to build a new temple this year. Its name will be Austa Bhujadhari Maha Mrityunjaya Mahadev Siva Panchayan Mandir, which means raising the eight great properties of the great Shiva in the context of caring for the souls of the dead. Its construction is of particular importance for believers because traditionally they maintain their family ties and memory of their roots.

The money for people who suffered as a result of a catastrophe in 2015 is still being collected on the occasion of this event.

Parade of women with jugs on the head on the occasion of Sapta is called Kalas Yatra – means literally translated ‘pilgrimage with a jug of clean water’. Its indispensable element is red – festive – color of sari. Women also wear a ritual malha from the seeds of the bodhi tree. Tradition says that Kalas Yatra is done barefoot, but I have not noticed a single woman who would support this tradition. The last – and most important – element of the parade is that jug with clean water carried by each of the ladies. Not necessarily on the head – who likes it. For these people, it’s an eternal way of carrying weights and anything that requires balance. I also saw, however, the Nepalese, which carried jugs in their hands. 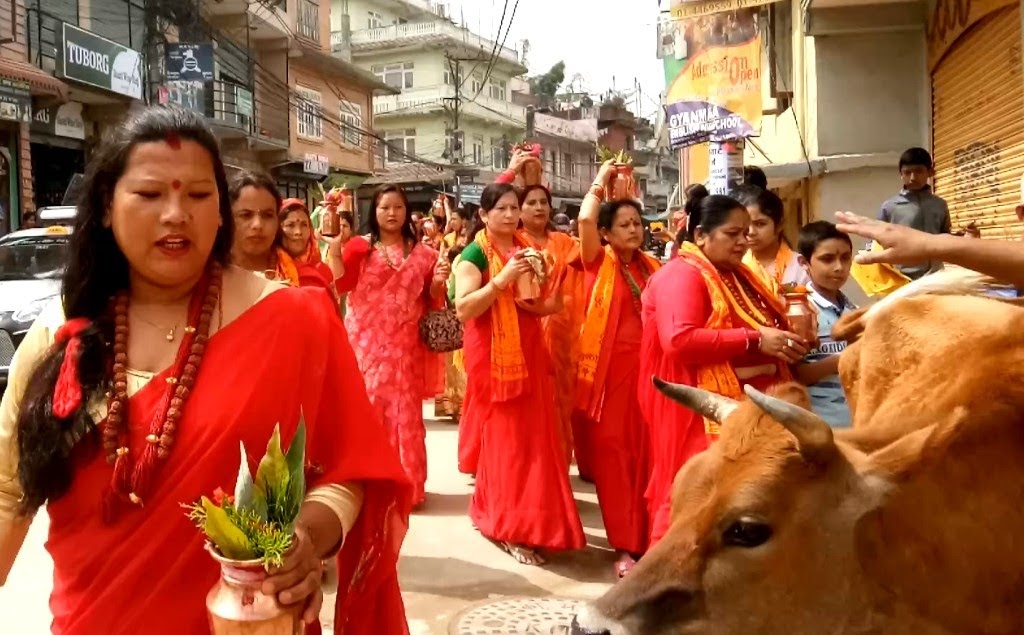 The tent stands opposite to a small temple on the Simaltar Tol estate. The decor is clean, elegant and colorful. There are mats in front of the stage, further placed chairs. Pitchers with clean water brought during Kalas Yatra stand in several rows below the stage. An important place is occupied by portraits of dead people brought by their relatives, Sapta participants.

Seven holy days are filled with a three-point program.

At seven in the morning a morning warm-up is organized in a specific Indian style. The Nepalese people have not much experience in everyday gymnastics. School activities rarely include something like physical culture, which would allow to develop an orientation in the coordination of physical exercises. Perfectly, however, they find themselves in the art of dance passed down from generation to generation, which is also a form of sacrifice for Shiva or Krishna. That’s why their gimnastics includes mainly dance elements with – as you can see on the film below – mainly religious music.

Then – around eight o’clock – women bring delicacies, fruits and various varieties, incense and money are also offered. Puja is led by two priests, who alternately sit at the microphone and for four hours – in total – are singing the verses in Sanskrit language. Because they are both young, we could hear by what effort an hour-long work can be done with a voice. 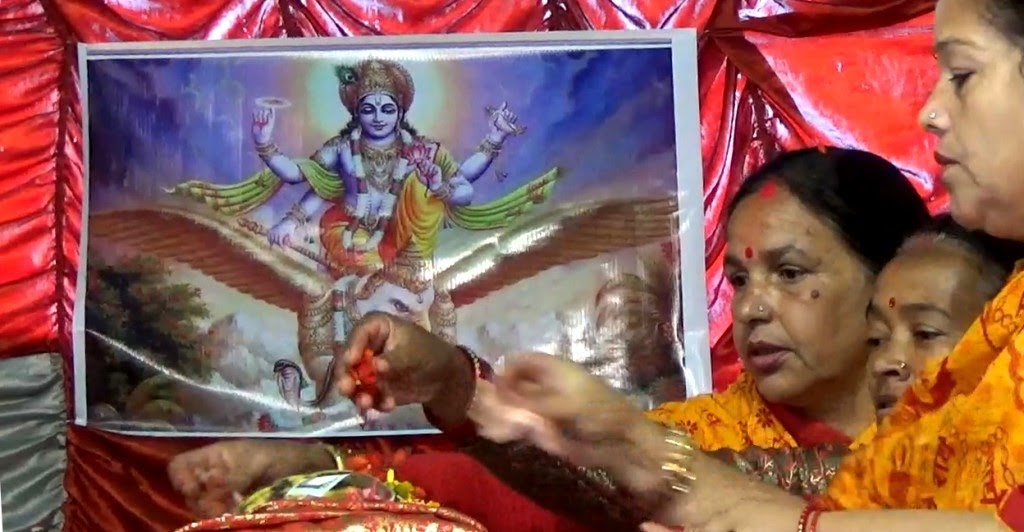 Stories are something like our Polish,Catholic sermons. The priest uses the sacred source text and adds a lot from himself. Listeners sit from one to four in the afternoon, come in – go out and talk freely, commenting on ‘sermons’ or gossiping.

Simaltar Tol is an old housing estate located on the outskirts of Kathmandu, near the Boudanath stupa. Its mainly inhabited by the Tamang and Brahmin communities, but can be met also Sherpas and people from other Tibetan nations. The tiny Shiva temple was built under an old tree. Under the tree was placed Buddha Sakyamuni, which accompanies daily local meetings in this center of the estate. Siva and Siakyamuni together constitute an excellent company, which at the same time gives a wider picture of the Nepalese confession. People living in Nepal connect their shivaism and Buddhism, mixing devas and buddhas as much as they like. Many say that Sangha – the society in which you live – is one of the sacred pillars of great consciousness, so in the blessing of Buddha and Shiva are bathing together all the members of Nepalese communities. 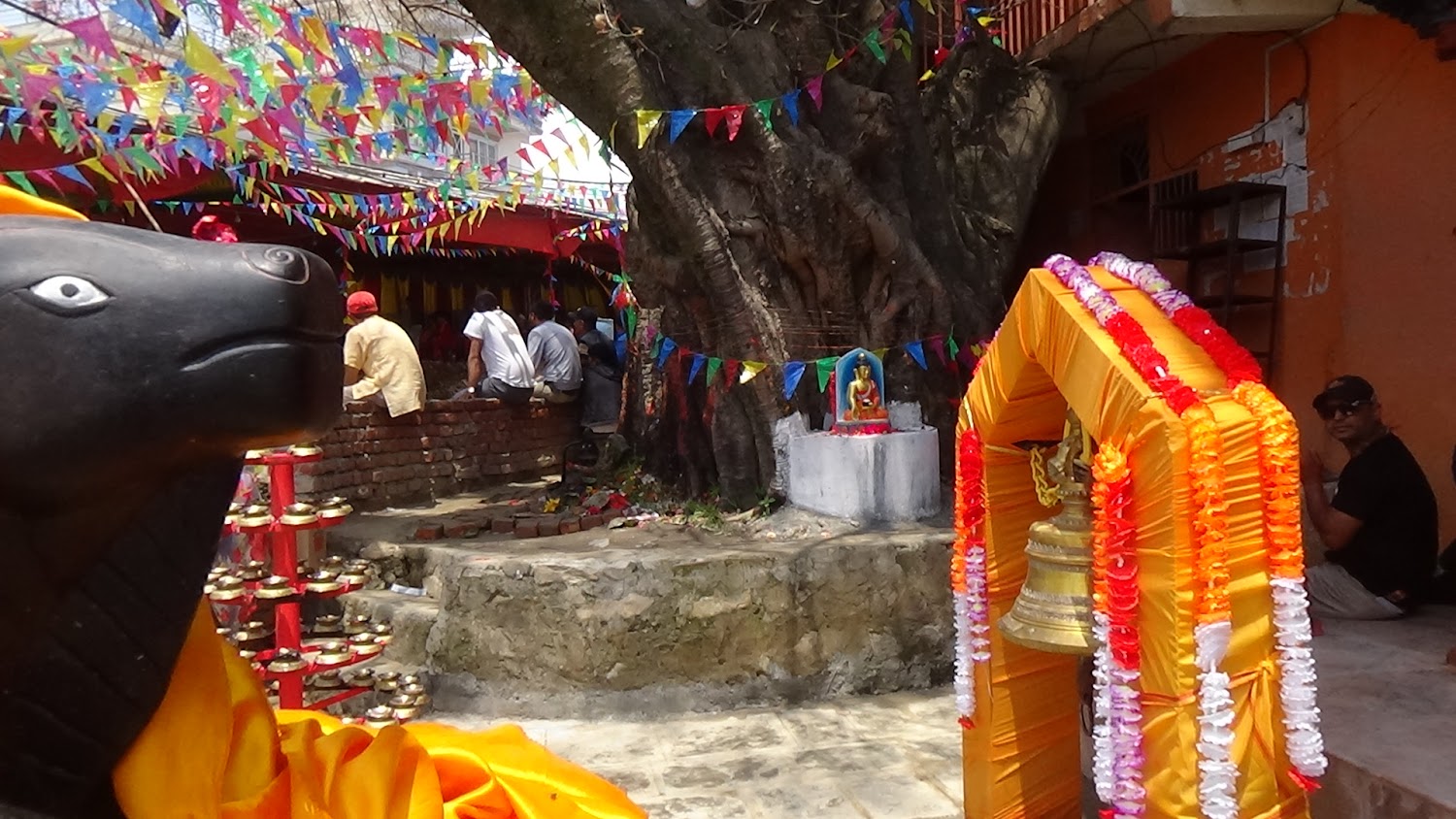 The Brahmin climate on Simaltar Tol is complemented by several bells and a roofed fire place, around which mandalas of various meanings and sacred rice and delicacy offerings are arranged.