The next day we woke up, we decided to visit the Castle of Queen Victoria.

We ate a very western breakfast and then seated in a taxi which on my order went to the metro. After 15 minutes of driving, we stepped out next to the entrance of the metro. This was my first time riding a metro. I was so excited. Sadly they didn’t allow us to take pictures. But we got to take a picture of the tokens.

We went down by stairs and it looked a little bit like a train station. There was a token counter where we bought 5 tokens, each for 5Rs. Then we had to go through a place where we used our tokens (it was a magnet) to open the door. After another downstairs, we were in a big hall. On the sides, trains were coming. Like in the movies. Then the fast metro came. We stepped in. It was like in a tram but way faster. If in the car, the ride takes a half hour then in the metro it takes just a few minutes. It was incredible. 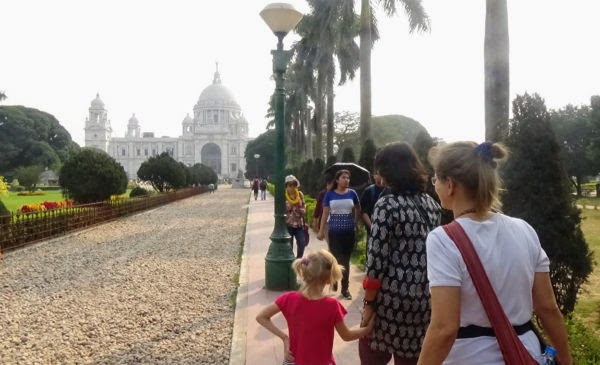 After we reached the station we headed to the Castle of Queen Victoria. Ticket price for non Indian people was way more expensive then for Indian people but it didn’t stop us from buying them.

We walked through a really beautiful garden full of flowers where some people were laying down, relaxing, or talking. On the way, we admired a statue.

After we walked into a castle which was a museum. Mostly with paintings. It was incredible. They didn’t allow cameras inside so we were out of really nice pictures. In the end, we walked out to the backside of a castle, where we took a rest for a while. But not for a long because our friend had her class called ‘The Healing Drum Circle’. It’s once a month, on a day of the full moon. It was supposed to be next to the Ganges River. Again we took Taxi. When we reached the place we were seated and had to wait for a little while till people came and all was organized. It started at 4:30pm. Everyone got an instrument and we all were making music. We were supposed to go back to the nature. Some people even danced. It took 1 hour, after which we went home buying some cakes on the way.

We ate a very Indian dinner and went to sleep after a tiring day.